Square stock dropped more than 5% in extended trading Wednesday after the company reported weaker-than-expected gross payment volume and guidance for the upcoming quarter.

The payments processor beat analysts’ estimates on earnings and revenue. Here’s how the company performed in the first quarter compared with what Wall Street was expecting:

Gross payments volume came in at $22.6 billion, just under the $22.8 billion analysts were expecting. Second-quarter earnings guidance also came in light, with the company forecasting earnings per share between 14 cents and 16 cents on revenue between $545 million and $555 million — both lower than anticipated.

Shares of the Square fell as much as 8% cent in after-hours trading before paring losses. The stock is up more than 25% year to date. In the past 12 months, the stock has surged more than 50%. 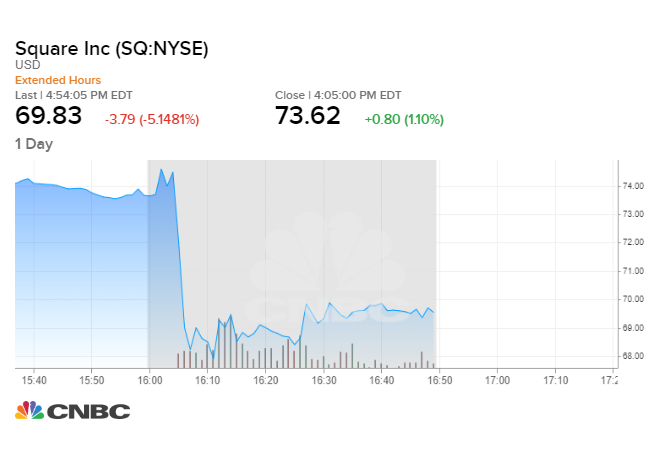 “We have seen meaningful traction with the Cash App, and believe we are just at the beginning with our seller ecosystem,” Square CFO Amrita Ahuja said on a call with reporters. “Not only are we growing the base of monthly active users, but we’re growing the engagement per user — those have compounding effects in the results of our business.”

A large portion of revenue growth came from strength in larger sellers, which Ahuja said now make up more than 50 percent of overall total payment volume.

Revenue from the company’s subscriptions and services came in at $219 million for the first quarter — a 126% increase year over year. The company said growth was driven by Cash App, Caviar, Square Capital and Instant Deposit for sellers.

Square also reported a surge in small-business lending, facilitated through Square Capital. In the first quarter, the company said it originated more $508 million across 70,000 loans — a 50 percent increase year over year. To date, Square has issued a total $4.8 billion in small-business loans.

In December, the fintech firm refiled its application for an industrial loan company charter after pulling it earlier in the year to answer questions from regulators. The company is looking to launch “Square Financial Services” which among other things would allow it to take federally-insured customer deposits.