U.S. jobs growth surged in April, with 263,000 new positions created. That was well above expectations, and could provide more evidence that the U.S. economy is firing on most cylinders. It looks like stocks might get an early lift from the data after two days of Fed-related struggle.

As job growth accelerated, the unemployment rate dropped to a near 50-year low of 3.6%. You have to go back to December 1969, the time of the second manned moon landing, to see unemployment at  levels like this. Meanwhile, wages rose 3.2% year-over-year in April, the same as the previous month, and the ninth-straight month of 3% or better pay growth.

Stocks, which had already been climbing in pre-market trading, appeared to get a new burst of positive sentiment from the data, and were solidly in the green after two-straight days of weakness following the Fed’s meeting and talk of higher inflation. Analysts had been expecting jobs growth of closer to 200,000. Today’s number was up from a revised 189,000 in March, and puts memories of the weak February data farther back in the rear-view mirror.

If you want to find any signs of softness, there were a couple. Manufacturing job growth was flat for the third month in a row, and the labor force participation rate declined slightly from March. But those were relatively minor considerations in a report that arguably showed some real muscle in the economy.

Construction job growth, which had been weak earlier this year and caused some worries, rose a solid 33,000 in April. With most of those gains coming from non-residential activity, maybe it reflects signs of life in business investment, which had been flagging.

The business and professional services segment continued to shine, adding 76,000 jobs in April. Health care was another big contributor. Meanwhile, some of the traditionally lower-paying businesses like retail trade and leisure and hospitality didn’t contribute much to April’s growth. While those jobs are perfectly respectable, they tend to not be the kind people can build high-paid careers around.

Speaking of highly-paid, the wage growth number was right in the market’s wheelhouse, neither too high or low. Some investors came into the report worried that sharp wage gains might put more pressure on the Fed to tighten rates, but this data doesn’t show a big upsurge from previous months. At the same time, wages have now grown 3% or more year-over-year for nine-straight months, maybe a sign that workers are finally seeing some solid and reliable gains. This arguably could help strengthen consumer demand.

In one possible sign that the report didn’t spark inflation worries, U.S. 10-year Treasury yields fell slightly in the minutes after the data, to 2.54%. That’s down from 2.68% at the start of the year and from well over 3% in late 2018. Falling yields tend to reflect a market less concerned about price pressure.

Before payrolls grabbed the news cycle, Thursday’s session saw stocks under continued pressure as investors continued to digest Fed Chair Jerome Powell’s comments. As a reminder, Powell said interest rates are in a good place and hinted at low odds for any near-term changes. That seemed to disappoint some investors who might have been hoping for more stimulus in the near future.

Besides not endorsing any immediate case for a rate cut, Powell called low inflation “transitory.” The market didn’t seem to know what to make of that. He used the word ‘transitory’ a few times and in a few different ways. ‘Transitory’ language might mean less probability of a rate cut.

As stocks lost ground, volatility picked up. The VIX—thought of as the market’s “fear index”—jumped from under 13 earlier this week to above 16 at times on Thursday. We haven’t talked much about volatility lately, partly because it hasn’t been much of a factor. The VIX action on Thursday might serve as a reminder to investors of just how skittish this market is.

Going into the Fed meeting, few if anyone expected to see a big effect one way or another. Futures prices had baked in almost no chance of a rate change. The reaction to Powell’s words, which arguably were more “perceived” news than real news, might be a lesson for investors not to get too comfortable.

Powell could end up being right about inflation, but on the other hand, the numbers aren’t telling us about big price increases anywhere near. For instance, crude oil fell about 3% Thursday to one-month lows as U.S. stockpiles swelled this week, and a bunch of data back on Monday and Tuesday came in below expectations. If you’d said a week ago to watch for inflation, it might have worried investors more. Not so much, maybe, after all this.

That’s not to say prices can’t rise, and Powell’s remarks might have brought some extra momentum into today’s wages figure in the jobs report. The question might end up being how Fed funds futures react to today’s data. The futures market finished Thursday still pricing in nearly 50% chances of a rate cut between now and the end of the year. Wage numbers from here on out could work themselves into the futures market’s rate odds.

The Bullish Argument For Inflation

Also, what Powell said arguably doesn’t sound too bearish in the long run. No immediate need for lower rates might mean he thinks the economy is doing fine without a new set of training wheels, and his forecast for higher inflation also could back up hopes for improved economic metrics. High prices, after all, often come in an improved demand environment.

After a decade of slow price growth that’s squeezed company margins, a little price inflation might be welcomed by many S&P 500 firms. However, there’s a sense that the investor community doesn’t completely trust the Fed to have a cure for low inflation. Inflation has consistently trended below the Fed’s stated 2% target for most of the last few years.

Getting back to VIX, it appeared to really kick in when it hit 14.5, and galloped toward 17. That was a quick move up, and one of the more interesting moves of the day. Still, VIX ended up giving back most of those gains by the end of the session Thursday.

Another interesting move Thursday was in Info Tech stocks, where semiconductor names bucked the day’s lower trend. Advanced Micro Devices, Inc. (NASDAQ: AMD) led the way with better than 5% gains after reporting earnings earlier this week, and it looks like AMD might have brought some of the other chip firms back with it. Meanwhile, Treasury yields continued to move higher after the somewhat hawkish stance from Powell.

Besides the jobs report, some other stuff is going on today. A bunch of Fed officials will be interviewed throughout the day on CNBC, so it’s possible one or more of them might be asked to expand on Powell’s views. Any of those interviews have potential to affect stocks and Treasuries. Also, the ISM non-manufacturing number for April is due this morning after the manufacturing number earlier this week came up short of analysts’ expectations. Factory orders, however, were strong in March.

In corporate news, Tesla Inc (NASDAQ: TSLA) rose 4.3% Thursday after the company announced plans to raise $2 billion through new equity and convertible notes. That stock has been hammered most of the year, so it might be interesting to see if this development gives it any momentum. 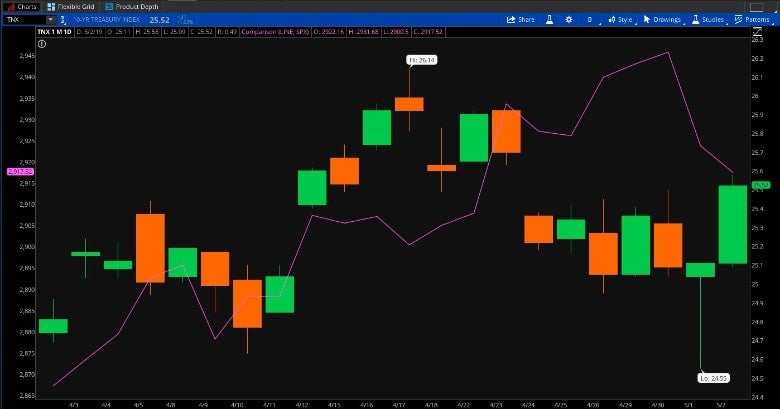 FIGURE 1: FORTUNE CHANGE: The 10-year Treasury yield (candlestick), had been moving lower over the last week until Wednesday, when it found some strength from Fed Chairman Powell’s remarks. The S&P 500 Index (purple line), had been moving higher, but fell after Powell spoke. Data Sources: Cboe, S&P Dow Jones Indices. Chart source: The thinkorswim® platform from TD Ameritrade. For illustrative purposes only. Past performance does not guarantee future results.

Financials In the Lead: Financials have been on a bit of a roll over the last month after underperforming other sectors earlier this year. That comes despite mixed earnings results from some of the big banks, along with falling mortgage rates that can sometimes dampen profits. Over the last month, in fact, Financials are the best-performing sector, and easily outperformed the S&P 500 Index (SPX). Several possible reasons come to mind, aside from the obvious one about the Fed saying this week it’s not ready to reduce interest rates. One factor could be some better news from the housing market, with new home sales improving in the most recent report.

Strong consumer confidence readings and dropping mortgage rates could both be helping smaller regional banks that depend more on the retail business, while larger bank stocks could be benefiting from general economic strength and investors coming back into the market after last fall’s tough sledding. Another factor could be a recent widening of the yield curve after it inverted in late March. One thing to perhaps be mindful of is what one CEO told CNBC Thursday: He said consumers are confident, but aren’t spending on some of the bigger-ticket items like cars and major appliances. Any sign of improvement in those metrics would probably bode well for banks.

Earnings Estimate Back in the Green: After months of seeing analysts’ Q1 earnings estimates for S&P 500 companies decline, investors might be cheered to see them start moving up now that we’re nearly a month into earnings season. Some analysts still forecast a year-over-year Q1 drop, but others, including S&P Capital IQ, now expect a slight gain when all is said and done. That firm now forecasts earnings to rise 0.9% in Q1, though it projects Q2 earnings to fall 0.2%, down from its initial estimate for a 0.7% climb. For the full year, the firm sees a 2.6% rise in S&P 500 earnings, well below the 22.9% recorded in 2018. Leading sectors this quarter from an earnings gain standpoint could include Health Care, Industrials, and Communication Services, according to S&P Capital IQ consensus, with Energy and Materials bringing up the rear.

From the Powell Files: After apparently spooking the stock market a few times in 2018 with his remarks, Fed Chairman Jerome Powell had a long stretch early this year when he often seemed to soothe investors. That came to an end Wednesday, apparently, when he didn’t endorse the need for any near-term rate cuts and also said he expects low inflation to be transitory. Wednesday’s and Thursday’s losses were widely attributed to Powell’s words. Looking at how things played out after Powell spoke, one almost wonders if people have become so analytical about every word he says that it’s impossible to do his job. Many investors cheered when Powell’s predecessor Janet Yellen started the move toward more transparency around the Fed’s decision making. Powell continued that tradition by adding post-meeting press conferences to every meeting rather than just four a year. But maybe we’re at the point where we don’t necessarily need to see every bit of the sausage being made.

Solving The Jigsaw Puzzle Of Filling Aircraft With Freight