Stocks are tanking as investors fear a trade war, but there are many market pros who believe there’s a rescue plan that could calm the market.

That ‘rescue’ has to do with what the Trump administration will say about the tariffs on $200 billion in goods that are expected to be raised to 25% from 10% just after midnight. President Donald Trump first warned of the tariffs in tweets on Sunday, when he said China was attempting to renegotiate aspects of trade talks.

But if there is no announcement, analysts expect more selling.

U.S. Trade Representative Robert Lighthizer and other members of the Trump administration are expected to have dinner with China’s Vice Premier Liu He, who until Thursday was seen as the potential ‘deal closer’ but now no deal is expected.

“There’s a lot of conflicting things out there…There’s rumors the vice premier’s power has been limited,” said Art Cashin, director of floor operations at UBS. “You’re living in a world where one Trump tweet can change everything.”

The Dow was down about 400 points in mid morning trading, and Cashin said there’s some thinking in the market that Trump will take some action to stop the decline. He noted that he tweeted positive comments about China’s commitment to a deal Wednesday, which helped temporarily lift stocks.

The bond market, meanwhile was seeing a surge of buying, which drove the 10-year yield to 2.43% and its yield is now lower than that of the 3-month bill. That is called an inverted yield curve, meaning the longer dated security yield is below the shorter, and it has been a reliable sign of pending recession if it remains inverted. It had been inverted earlier this year, but reversed on better economic data and signs trade talks were progressing.

“I think there’s a general feeling here…the bears are a little nervous he’s going to come in and say something, like conversations are cooperating and maybe we can postpone this for a week, or something like that, and it could have an impact on the market,” said Cashin. 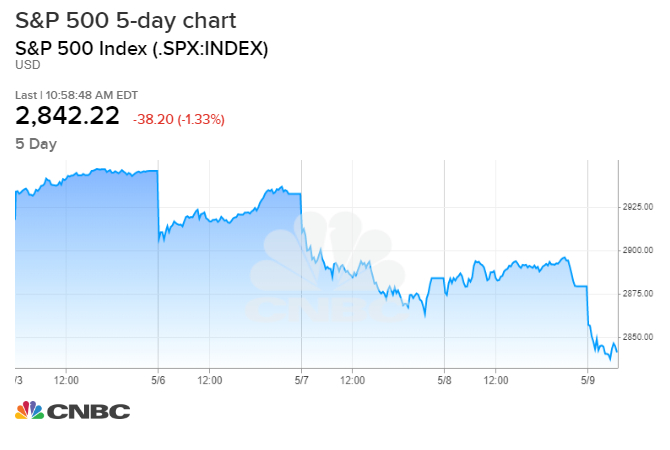 But State Street’s Michael Arone said the Trump administration can still move forward with tariffs but then take its time implementing them.

“If they have dinner, and the U.S. side isn’t satsified with the Chinese response, and they pursue the tariffs beginning at 12:01, I still think in the end, over the next few weeks, the two sides will hash out some kind of mutual agreement where they can move forward. Both sides do not want a prolonged trade war,” said Arone, Chief Investment Strategist for State Street Global Advisors.

Arone said the market is likely to continue selling if it looks like negotiations will be extended for a lengthy period. “If it’s concluded that the U.S. and China will not reach a trade agreement any time soon, you could have your typical correction, between 5 and 8%. That’s not my expectation. I think cooler heads will prevail,” he said.

Quincy Krosby, chief market strategist at Prudential Financial. Krosby said the market is hoping to hear that nobody walked out of talks and that the negotiations will continue.

“There’s just too much uncertainty embedded in these negotiations. You could just sit there in cash and wait,’ said Krosby, who said the market is watching for comments from the trade representative for a better read on the situation.

“When the doves from the administration communicate optimism, the market has grown weary of that. [Investors] are actually following Lighthizer,” she said, noting there is talk that he has been meeting with members of Congress to discuss the talks and tariffs.

Analysts have said the increase in tariffs, and any retaliatory response from China, threatens to hurt the global economy and corporate profits, making stocks around the world appear overpriced. The impact would be less on the U.S. economy, but there is concern the situation will escalate and Trump also threatened to put tariffs on another $300 billion of Chinese goods, though the administration has taken no action on that.

Arone said Trump no doubt was empowered by the strength of the U.S. market, and the fact that until this week, stocks were near highs. He said he didn’t put a lot of faith in a report that the Chinese felt emboldened by Trump’s tweet calling for a Fed rate cut because it made the U.S. economy look weak.

“More likely to have happened is Trump felt like this economy grew more quickly in the first quarter, the employment numbers prior to his tweets over the weekend were very strong. The rumor I was hearing was Lighthizer and folks suggested China was backing away from their previous pormises, and Trump reacted,” he said.

BitStamp Massive Sell Order Could Be Behind The Bitcoin 'Flash Crash'