Home Markets Live Feed Trade War Heats Up As China Retaliates With Raised Tariffs Of Its...

The other shoe has dropped.

As was feared, China has retaliated, raising the stakes in a trade war that has raised concerns about the future of global economic growth. The Asian nation announced increased tariffs on $60 billion of goods from the United States after the U.S. raised tariffs to 25% from 10% on $200 billion in Chinese goods Friday and trade talks between the world’s two largest economies didn’t result in a deal last week. The new tariffs from China are set to go into effect June 1.

Trade-related pressure had been on the market even before the news. Stocks in mainland China fell, European shares were broadly lower, and U.S. companies with exposure to China such as trade bellwethers Caterpillar Inc (NYSE: CAT) and Boeing Co (NYSE: BA) faltering in early trading. Demand for safe-haven U.S. government debt was higher, and Wall Street’s fear gauge, the Cboe Volatility Index (VIX) was up more than 26% to above 20. See figure 1.

Despite what are looking like solid losses for the market at the moment, it may be worth remembering that on Monday one week ago, the three main U.S. indices ended up erasing much of the losses they had sustained after tweets by President Trump over the weekend threatened new tariffs. This isn’t to say a rebound is imminent—past isn’t necessarily prologue, now or ever—but the ongoing trade saga has seen a number of peaks and valleys in the market, sometimes within the same day.

As the trade war drags on after some market participants may have thought a deal would already have been hammered out, Wall Street seems to be finding itself in an interesting dynamic.

On the one hand, U.S. economic data has been pointing to an economy that seems to be humming along relatively well even as inflationary pressures are muted. That’s pointing to a Goldilocks scenario of economic growth that’s not too hot and not too cold, with the “just right” temperature arguably a good thing for the stock market.

But now, with new tariffs in place from the United States and announced by China and no clear sign of how or when the trade war will end, one of the key legs of this year’s market rally seems to be getting wobbly—namely optimism about a trade deal getting done.

Market participants may not have expected to be devoting so much thought, energy, and money toward trying to trade tariff headlines to this degree at this time. Many probably thought they would shift attention back to corporate earnings, which are still coming in.

But over the long run, earnings always matter, even though they may not be the main story at the moment.

Also this week, investors are scheduled to get a peek at a raft of economic data for April, including retail sales, industrial production, housing starts and business permits, and the Conference Board’s leading indicators. The University of Michigan’s consumer sentiment index for May is on tap for Friday.

As the trade war between the U.S. and China continues, it’s probably worth keeping an eye on U.S. consumer-related data because Americans are having to deal with higher costs caused by tariffs. That could eat into retail sales and consumer confidence, and end up being a drag on GDP and an inflationary pressure.

Finally, oil prices were starting the week higher after two Saudi oil tankers suffered an attack in the Persian Gulf over the weekend. Crude oil prices were up nearly 2% early Monday. With all the focus on tariffs as a potential drag on the consumer economy, crude prices are worth keeping an eye on.

On Friday, investors didn’t seem to be wanting to catch a ride with Uber Technologies Inc (NYSE: UBER). On its first day of trading, shares of the ride-hailing company fell more than 7.6% and they continued to take a beating in early trade Monday with shares off about 6%.

One reason for the lack of enthusiasm Friday could have been that the company’s initial public offering came out at a tough time as the market was getting slammed last week with all the fretting about the U.S.-China trade situation. Also, earlier in the week, direct competitor Lyft  Inc (NASDAQ: LYFT) reported a loss in its first quarterly earnings report as a public company, which probably kept sentiment soft through Uber’s launch on Friday.

Also, investors considering getting into UBER may have been keeping their powder dry, holding off on buying until after seeing what happens in the first few days of trading, or at least until the wider market calms down a little.

Some of the pressure on LYFT may also have come as investors may be rotating into UBER. LYFT shares fell more than 7.4% on Friday, perhaps also reflecting the poor sentiment around UBER shares. Talk about a traffic circle. 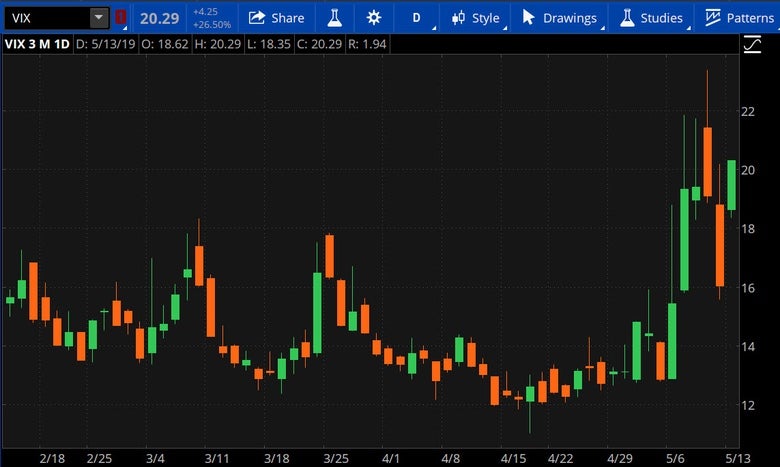 FIGURE 1: VOLATILE VIX. As stocks staged an impressive comeback on Friday, Wall Street’s main fear gauge went the other way. The Cboe Volatility Index (VIX) rose above 20 early in the day but closed just above 16 by the end of the day, as investors took some solace in President Trump saying trade negotiations between China and the United States will continue. But with hopes of a quick end to the negotiations all but dashed, today’s stock selloff has the VIX back above 20. Data Source: Cboe. Chart source: The thinkorswim® platform from TD Ameritrade. For illustrative purposes only. Past performance does not guarantee future results.

Technically Speaking: There’s a sense among some analysts that a full-blown trade war with limited hopes of a deal could mean a significant drop in stocks from recent highs. While it’s impossible to predict where things might go from here, it’s interesting to see that a 10% drop in the S&P 500 (SPX) from the recent all-time closing highs near 2946 would bring it back to an area that marks roughly a 50% retracement of the rally from Dec. 24 to late April. Sometimes a 50% retracement can be significant from a chart-watching perspective.

CPI and the Fed: Fresh data out Friday showed that consumers didn’t have to spend as much in April as previously thought. The consumer price index compiled by the Bureau of Labor Statistics showed a 0.3% monthly increase in April, which was slightly less than the 0.4% rise expected in a Briefing.com consensus estimate. When you strip out volatile food and energy prices, core CPI rose only 0.1% compared to an expected 0.2% gain. “The key takeaway from the report is that it will keep the Fed in a neutral state of policy-setting mind and the market in an uncertain state over what the Fed’s next move will be – and when,” Briefing.com said.

UPS Ships US Beef To Japan, Traces Movement Via blockchain