The state of Georgia was shaken in April by news of two veterans dying by suicide in a two-day period.

With both deaths occurring near hospitals servicing the Department of Veterans Affairs, the VA was very much in the spotlight, as the media and citizens tried to make sense of the far-too-common tragedy of veteran suicides. About 20 veterans take their own lives every day in the U.S., according to the VA.

While it may seem like a laudable initiative, the executive order is unlikely to produce any results anytime soon. The resolution stipulates the creation of a new cabinet-level task force to create a public health roadmap with the aim of improving quality of life for veterans and helping to mitigate the veteran suicide crisis.

The exact cause of why so many veterans choose to end their own lives is hard to determine. One of the most common factors that has been identified in medical studies is post-traumatic stress disorder, or PTSD.

“Combat veterans are not only more likely to have suicidal ideation, often associated with posttraumatic stress disorder (PTSD) and depression, but they are more likely to act on a suicidal plan.” according to a 2012 article published in the Cleveland Clinic Journal Of Medicine.

One solution that might help veterans deal more effectively with PTSD is cannabis.

Veterans have a hard time getting access to the plant: the VA is a federal agency and therefore must follow federal laws.

This means VA doctors cannot recommend or prescribe medical marijuana, and even when it’s prescribed by non-VA doctors, the herb is not covered by the VA’s insurance.

How is it possible that veterans suffering from PTSD cannot easily obtain a medicine that could help them?

Benzinga spoke with two Iraq War veterans to get a better understanding of how cannabis can help with PTSD and what veterans with PTSD have to go through. For them, cannabis was not only a lifesaver, but also allowed them to create successful businesses that mostly employ other veterans.

To understand the scientific relationship between cannabis and PTSD, we sat down with Dr. Annabelle Manalo, the scientific director of Tikun Olam, an Israel-headquartered clinic focused on cannabis treatments.

It is estimated that around 70 percent of Americans have gone or will go through at least one traumatic event during their lifetimes. Some 20 percent of these people will end up developing post-traumatic stress disorder, or PTSD. At any given time, there might be more than 13 million Americans suffering from PTSD.

PTSD is a condition marked by a number of symptoms, said Tikun Olam’s Manalo. The company conducted a survey of hundreds of patients diagnosed with the condition and found that the most common symptoms were averse memories, rage attacks and recurring physical pain.

While war veterans represent a small share of all people suffering from PTSD, it is often said that it was this group that brought the condition into the spotlight. Because of the magnitude of the traumatic events they suffered during conflict, veterans’ symptoms can be correspondingly significant, often resulting in major consequences.

The Stories Of Two Vets

Mychol Robirds, a veteran turned cannabis advocate, said living with memories of war is even tougher for those trying to battle it alone or who are “too tough” to seek some form of treatment.

“I fell in the category of ‘too tough; only until my life started to fall apart as my physical and mental conditions deteriorated,” said

Robirds, who was deployed to Iraq in 2004, serving with the 1st Infantry Division’s 1st Battalion, 7th Field Artillery Regiment.

He was discharged a year later after sustaining severe injuries when his convoy was attacked by a suicide bomber.

“Being hit face to face by a suicide bomber isn’t as easy to ‘move on’ [from] like the world expects you to,” he told Benzinga.

It’s not only injured veterans who are affected by PTSD.

José Belén, who recently wrote an an article for Benzinga titled “Cannabis, Veterans, PTSD And Corporate America: A US Army Vet’s First-Person Experience,” served three years of active duty service in the U.S. Army, joining operations in Iraq in 2003 at just 20 years of age.

“While in combat we lost brothers and sisters directly to combat fatalities; I witnessed the horrors of war in watching a child die in front of my eyes,” he said. After being honorably discharged, Belén came home and started what became a 14-year battle with PTSD.

How Are Veterans With PTSD Treated?

The VA has a number of procedures and medications that it prescribes to veterans suffering from PTSD, often including psychiatric treatment, brain treatment and drugs like Ambien, Prozac and Effexor.

These medications and treatments are not a panacea, and in some cases come with dangerous side effects such as addiction.

“The medication just numbed me enough so I could sleep and disconnect from the 24-hour cycle of anxiety and sleepless nights,” Robirds said.

Belén said that that were prescribed to him at the VA for depression, anxiety and sleep drove him to “madness.”

“For example, I was prescribed both Effexor and Nortriptylene to be taken jointly. Well, once the side effects kicked in eight weeks later, had I not surrendered my firearms to my wife two months prior, I would have ended my life in an incident that occurred,” he said.

“My VA doctor acknowledged that she made a ‘mistake’ and should have never put me on those two medications at the same time.”

How Cannabis Can Help

After failing to somewhat restore their lives using VA-prescribed medication and treatment, both Robirds and Belén said they turned to self-medicating with cannabis. Even though the plant did not completely cure their conditions, both said the improvement was very noticeable.

In Robird’s case, he said cannabis helped him restore sleep and removed the dreams that had terrorized him for years.

Cannabis allowed Belén to “function and have emotions again,” he said.

“It allowed me to be the husband my wife deserves and the father my children deserve to have.”

Today’s science suggests that, when compared to prescription medication, cannabis doesn’t have any known long-term side effects and has very low addictive potential.

CBD, the non-intoxicating component of cannabis that was legalized on a federal level in the U.S., can also be beneficial for PTSD patients, although the best effects are achieved through combination with at least a small amount of THC, said Tikun Olam’s Manalo.

While there is no known treatment for PTSD — and cannabis is a means of managing symptoms — ongoing studies suggest the drugs’ potential is much larger, she said.

“There are many ongoing studies within and out of Tikun Olam; we believe that cannabis’ effectiveness in treating PTSD can indeed go beyond symptomatic treatment alone,” Manalo said.

“When it comes to cannabis treatment for PTSD and other debilitating conditions, it is important to remember that the human endocannabinoid system is built for neuroplasticity and protectivity of the nervous system — in other words, restoring internal balance. This promotes healing that is far beyond symptomatic.”

Why Isn’t The VA Allowed To Prescribe Cannabis?

In short, the VA is not allowed to prescribe cannabis because it’s illegal on a federal level.

While this could be changed, there still seems to be a lack of political willpower to do so — even though more than 65 percent of the American population supports cannabis legalization.

Three bills dealing with the VA and cannabis have been introduced in Congress; none have gone past the introduction step.

Two relate to research. One bill, The Veterans Medical Marijuana Safe Harbor Act, would allow veterans to use, possess and transport medical marijuana and to discuss the use of cannabis with a VA physician. 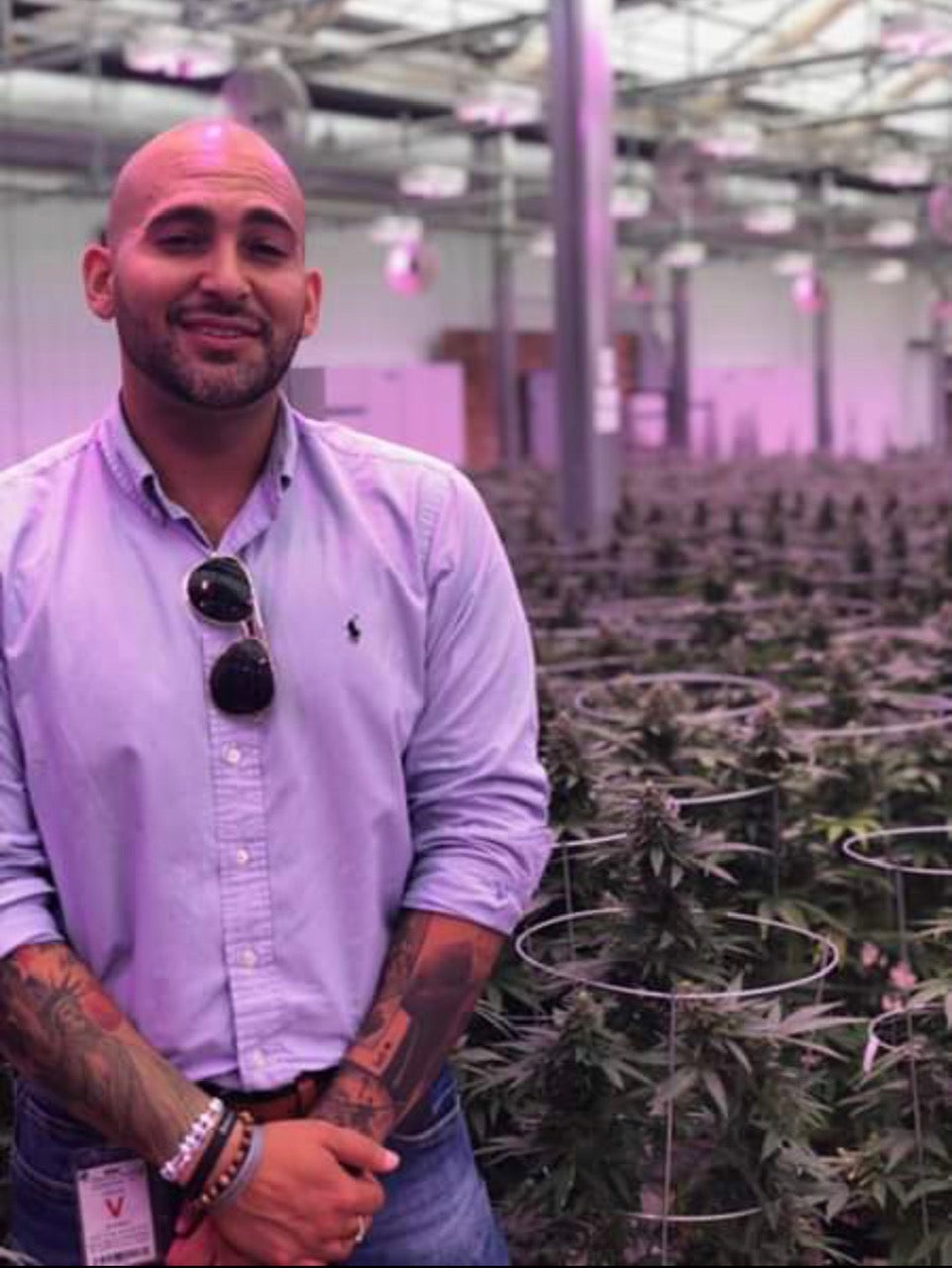 The VA has made some progress by allowing physicians to discuss cannabis with veterans. But what veterans say they really need is for the VA to allow physicians to prescribe medical cannabis to them — and for it to be covered by insurance.

Additional research into the properties of cannabis might be the force that could convince the government of its efficacy. It’s something that 30 U.S. states as well as some countries like Israel, where cannabis is prescribed for PTSD, already know.

What Can Be Done?

While veterans continue to suffer from PTSD and the VA’s efforts to address are clearly insufficient, some veterans are taking the matters into their own hands.

In 2010, Robirds launched San Diego, California-based Hero Payments, a pin-based debit processing solutions provider to cannabis businesses. In addition, he’s helping veterans grow hemp and is working to open brain centers across the U.S. where veterans can access special equipment that is too expensive in other clinics, as well as to facilitate access to cannabis for veterans.

Belén and his wife founded Mission Zero, an organization that aims to help veterans battling PTSD and to prevent veteran suicide. He’s an outspoken advocate for medical cannabis and is suing the U.S. government to have cannabis removed from the list of Schedule I drugs.

While helping and empowering veterans has a major impact, there is still much more to be done — and change is needed on a larger scale.

Take a look at some of the biggest movers in the premarket: Hilton Worldwide (HLT) – The hotel operator lost 61 cents per share for...

Here's How You Can Dress Your Turkey In Cannabis This Thanksgiving