Home Markets Live Feed Risks are rising for an oil price spike as tensions between the...

If not for the trade war, both oil and gasoline prices could be much higher than they are now on rising tensions between the U.S. and Iran.

Analysts say oil could be more than 10% higher, but if there is a resolution of trade issues, and the situation in the Middle East intensifies, there are risks of price spikes that take oil to as high as $100 a barrel this summer.

“If you do get a trade war resolution, a better economy coupled with Iran sanctions, that’s a recipe for higher oil,” said Francisco Blanch, head of global commodities and derivatives at Bank of America Merrill Lynch. Blanch said under that scenario, one incident could trigger a spike in Brent, the international benchmark, to $100 a barrel. 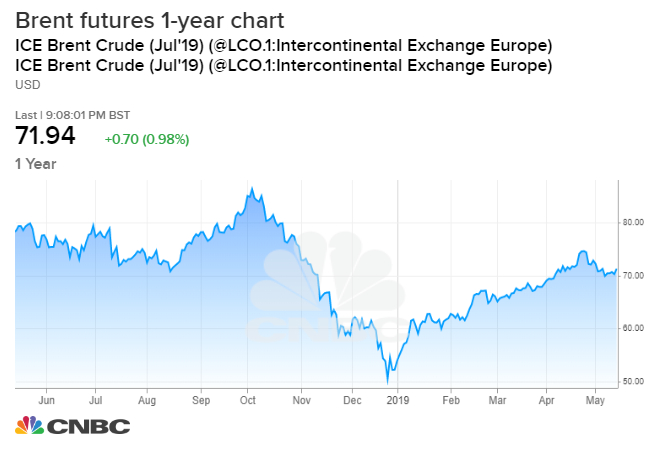 West Texas Intermediate futures are flat this week at just around $62 per barrel and down 2.2% for the month so far, even though the U.S. has sent an aircraft carrier and bombers to the Gulf due to unspecified threats, which U.S. officials say are the work of Iran.

The U.S. Wednesday ordered all non-emergency diplomatic staff to leave Iraq, after two separate attacks in the region and as the U.S. responds to other nonspecific threats. This week, two Saudi tankers were among four ships attacked off the coast of the United Arab Emirates, and Houthi rebels, who have ties to Iran, claimed responsibility for a separate drone attack on a key Saudi Arabian pipeline.

While it’s not clear Iran was involved, analysts expect more such incidents.

“Senior Iranian officials have made veiled and not-so-veiled threats to obstruct the ability of its regional rivals to export oil and exponentially raise the economic costs of remaining on the current policy course. They have also warned of ‘planned accidents’ which could lead to direct confrontation,” notes Helima Croft, global head of commodities strategy at RBC.

The Houthi, operating from Yemen, have previously attempted attacks on Saudi oil infrastructure. Saudi Arabia and Iran are engaged in a proxy war in Yemen. Iran also provides funding for Hezbollah, a Lebanon based group designated as terrorists by the U.S.

The Saudi Aramco oil pipeline was temporarily closed after the drone incident. It is a 1,200 mile oil artery the Saudis built to bypass the Straits of Hormuz during the Iran-Iraq war.

Croft said the presence of the U.S. Fifth Fleet in Bahrain would likely discourage Iran from trying to close the Straits of Hormuz, though it could could use its proxies and stage one-off attacks on ships.

“It is important to note that these are not the only flash points in the region, and while an off-ramp may yet emerge, the hawks appear in ascendancy, which leaves oil’s risk premium set to take center stage,” she noted.

Croft said while the Trump administration has not blamed Iran in the attacks this week, they are “under a very heavy cloud of suspicion and there is growing concern that the region’s long simmering cold war may be poised to become a hot one.”

John Kilduff of Again Capital, said that scenario is one side of the tug of war on oil prices.

“The battle in the oil market is the geopolitical premium versus the slowing global economy, which is the fallout from the trade war,” said John Kilduff of Again Capital “WTI would be pressing $70, and Brent would probably push on $80 to $85.” Brent futures were just under $72 per barrel.

But those prices have not moved much higher in last few weeks, even as it became clear the U.S. would play hardball with Iran and pressure its oil sales to zero. It’s been a year since the U.S. dropped out of the agreement between Iran and six nations, which prohibited Iran from working on its nuclear program in exchange for a lifting of sanctions. The U.S. is the only nation to break from the agreement.

Iran has threatened to restart elements of its nuclear program, unless the European signatories of the accord help allow it to make oil sales.

“Historically, with this kind of tension in the Gulf, there would definitely be a security premium in the price. We haven’t seen it this time—so far,” said Daniel Yergin, vice chairman of IHS Markit. “The two big reasons are the trade war, and its potential effect on economic activity and the huge growth in U.S. supply.”

Yergin said U.S. Secretary of State Mike Pompeo has made it clear when speaking to oil industry leaders that the boom in U.S. oil production has helped give the U.S. flexibility.

“This is a case study of how the growth in shale, and the change in the U.S. position affects perceptions about security,” said Yergin. In the past year, the U.S. has surged past Russia to be the world’s largest oil producer. Last week, U.S. oil production was at 12.1 million barrels a day, while exports surged to 3.3 million barrels a day.

“You have this firewall of U.S. output,” said Kilduff. “The Saudis can really turn the spigot on at will. There’s a lot of cushion as we go into this situation with Iran.” Saudi Arabia and OPEC, have been attempting to keep the oil market in balance under an agreement with Russia and other non-OPEC producers. The joint monitoring committee for that group meets this week.

“There was chatter in the market that this weekend, they could agree to raise the production cap to respond to the loss of Iranian crude,” he said. Analyst said Iran exports have already fallen below 1 million barrels a day and it could drop more, to as little as 200,000 barrels a day.

Analysts say the potential for more incidents in the Gulf is increasing, as Iran gets more desperate and its economy gets weaker under U.S. sanctions.

President Donald Trump this week denied reports that the U.S. was considering sending as many 120,000 troops to the Middle East to deal with Iran. But he added if troops were necessary, he’d send “a hell of a lot more.” Trump’s advisers, however, are seen as more hawkish than the president, and it was his national security adviser John Bolton, former U.N. Ambassador, who advised President George W. Bush in the war against Iraq.

“It’s a flammable situation and with lots of room for miscues and miscalculations,” said Yergin.

Blanch said Iran has several options, including dropping out of the nuclear agreement, but the most likely is that Iran will take indirect actions through proxies.

“There’s no sense they’re going to come back to the negotiating table,” said Blanch. “Iran could see being more proactive against U.S. aggression, for the home audience. At the end of the day, the loss of market share for Iran is a gain for the rest of the region. Other than letting others pocket money for the barrels you no longer can sell, you could target those barrels and maybe in the process push the price up and put some pressure on the Trump administration which doesn’t want to see higher gasoline prices. It’s a fine line to walk.”

Kilduff said the market is more on edge, even if prices aren’t rising.

“Because of the maximum pressure campaign the U.S. is putting on Iran, there’s little doubt the Iranians will try to act out through proxies in the areas. We’re tripping into conflict. That’s the sense in the market,” said Kilduff.

FreightHub Lands $30M In Series B