This is Part 1 of a two-part article series contributed by Thinknum Media.

In 2006, marijuana rights activist Jon Gettman conducted a study that found that marijuana is America’s top cash crop by a long shot. The study determined that the marijuana industry was valued at $35.8 billion, more than the combined value of the corn ($23.3 billion) and wheat ($7.5 billion) industries.

Colorado legalized marijuana distribution, sales, and usage in 2014. Since then, the state has collected nearly a billion dollars in tax revenue.

Other states want in on the action, and their numbers are growing. So are the nascent companies looking to get a piece of the action.

As the marijuana industry goes legit, we take a look at the major players in the legit weed industry as it stands: where they are, who they are hiring, and what they’re making or selling, in the first alternative-data report on the blooming weed industry.

Is weed the next billion-dollar industry, or is it all just a bunch of smoke? We look to the numbers for an answer in this report.

(And if you get confused by any language, we have a handy glossary at the end)

It’s easy to predict that the weed industry will grow. But to truly understand how it will scale, it’s important to first understand its components and how they are set up to expand. 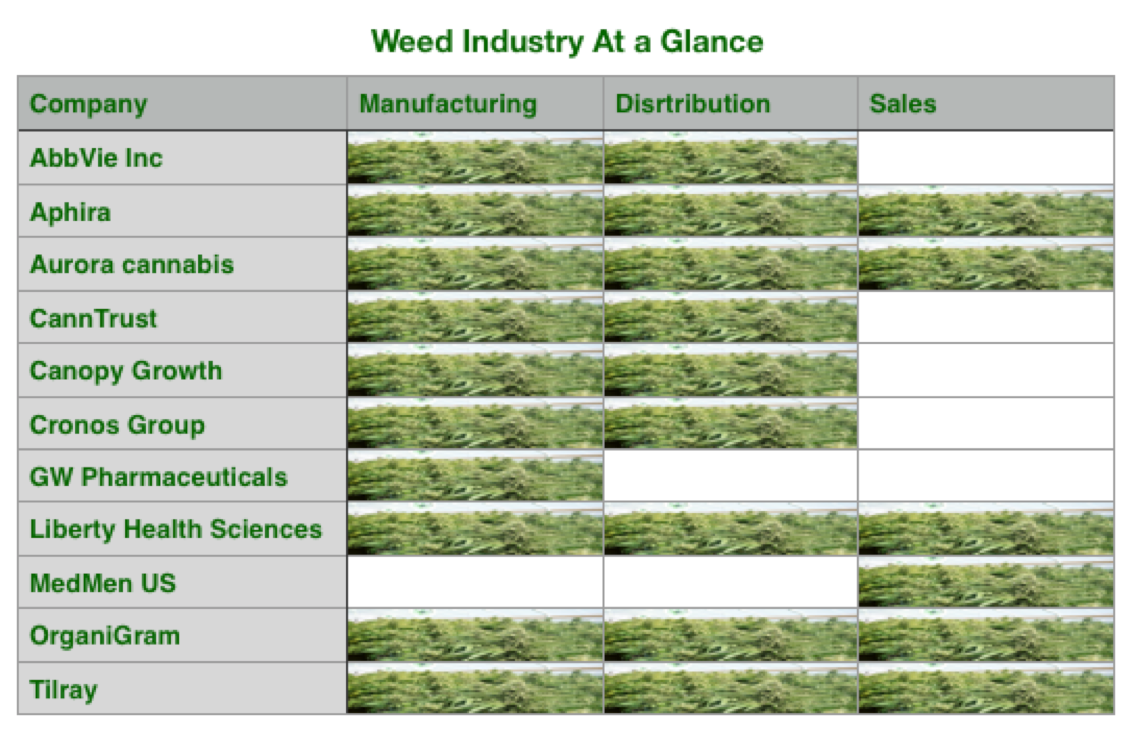 The extant, once-illegal weed industry, always resembled its future self: farms and manufacturers, distributors and packagers, and retailers. Call them what you want — your local weed guy or a pharmacy — but this industry was always structured for scale. The main difference is that we now have legitimate players who are in the process of scaling in public: they list jobs online, distribute product over borders, and sell to consumers at the retail level at locations they list online.

And because these nascent, legitimate players are taking their businesses to the web, we can track their growth over time. That, then, is the focus of this report: the blooming weed industry. Dozens of companies are scrambling to get what will likely become the largest slice of the pot pie: manufacturing. After all, if you’re supplying the suppliers, or if you are the supplier yourself, you’re in control.

We took a look at 9 of the most prominent (and promising) weed manufacturers to gain an understanding of how they’re hiring and growing. This provides a good indication not just of the expansion of the weed industry, but also of the health of each company.

Overall, we see rapid growth in job openings over time. Just nine companies surveyed are hiring for close to 1,500 people alone. Here they are and how they are hiring:

Remember Tilray’s meteoric rise in the stock market back in 2018? On the heels of Canadian marijuana legalization, this medical cannabis company made waves by being the first in the industry to ship medical marijuana to the United States. Someone who held stock in the company right before September ($65) and sold it on September 19 ($214) would have seen the stock’s value quadrupled…before it normalized back down to around $50.

Canopy Growth is the world’s largest cannabis company, flying under the auspice of Tilray (due to the aforementioned stock boom and bust) until recently. That’s because it just bought out Acreage Holdings, America’s largest multistate cannabis operators with roots in 20 states, for $3.4 billion that will take effect when, not if, marijuana is legalized on the federal level. While that’s a big deal, it is less than what beverage-maker Constellation Brands (NYSE: STZ) invested into Canopy a year ago ($3.8 billion).

Essentially, Canopy, a Canadian company that is known for its Tweed branded marijuana and mainly does medicinal products, just secured access to a nation-wide rollout of its products through a multi-billion dollar deal, and also recently received a huge payday from the makers of Corona Beer and Svedka vodka.

Not surprisingly, it is hiring in the hundreds as it continues this massive expansion.

The second-largest weed company by market cap, Aurora Cannabis produces and distributes medical cannabis with a production capacity of 500,000 kilograms per year. It also sells and makes indoor cultivation systems for those that want to “grow their own,” as well as hemp products.

While the number of job openings at the company is down slightly, the employee count as told by LinkedIn data has steadily risen since the start of 2019, and just cracked the 550 mark a few days back.

The third-largest cannabis company by market cap, Toronto-based Cronos Group is backed by tobacco giant Altria Group (NYSE: MO) which owns a 45% stake in the company. This is the same company that took a 35% stake in the mega-popular e-cig brand JUUL, which, when putting two and two together, looks to be a dope-dream product combination for those who want to vape weed.

Despite its place among the pack, Cronos has a tight-knit group of employees. According to its LinkedIn profile, around 77 people say they work for Cronos Group. That’s still triple the workforce it had in September of 2018, but compared to its larger competitors, it pails in comparison.

A budding company with a $3-billion market cap based in Ontario, Canada, Aphira is showing growth in just a few weeks of employee profile data tracked via LinkedIn:

Hiring roughly 50 people, the most-common of which include Extraction & Refinement Managers, Greenhouse Production Associates, and marketing professionals such as Brand Managers, Project Managers, and Graphic Designers.

Another Canada-based medical marijuana producer and distributor, CannTrust is undergoing a major self-investment period that is seeing it expand its greenhouses to produce up to 50,000 kilograms of weed annually. The company’s stated goal is to produce 100,000 kilos by 2020, which would be a fifth of Aurora’s output.

It is also investing into human capital; LinkedIn data shows a small increase in headcount over the past few weeks as it ramps up production efforts.

Based in Toronto, Liberty produces and markets medical-grade marijauna in both Canada and the United States. It is currently hiring for 24 openings, the majority of which are focused on patient liaison.

Interestingly enough, Liberty’s hiring efforts are creeping south of the Canadian border, mostly in Florida where it has a medical marijuana dispensary.

That also makes Liberty Health Sciences one of the few companies with a complete vertical integration; it controls every aspect of a transaction with its customers from the cultivation of the plant to distribution to patients. As seen with major companies like Amazon, vertical integration is one of the toughest things in business to do. But when it works, it is a fantastic basis for scale and expansion.

So far, every company in this report is based in Canada where marijuana is legal. AbbVie, on the other hand, is an American-based company that dabbles in the cannabis industry. It is mainly a biopharmaceutical that is known for drugs such as Humira for arthritis.

What lumps it into our profile is Marinol, a drug based on a compound similar to THC. That, in turn, makes it a competitor to medical marijauna manufacturers who are selling natural THC as opposed to AbbVie’s synthetic alternative. It also seeds it as a company for future expansion in the weed industry as American laws change.

With that said, AbbVie dwarfs its competitors in terms of job openings and size, as it is a representative of the old guard of pharmaceutical companies who will have to prepare for this new wave of potential treatment options.

GW takes things across the pond as the only British cannabis company within our group of major companies.

Over time, hiring at GW has remained steady, which is also seen when looking at the company’s LinkedIn headcount.

Of course, there are more than just nine companies that make marijuana products, but among the big and the small, these are the ones that stood during our extensive research. They are fully operational, mentioned by traditional media outlets, and in some cases, publicly traded.

Blackstone Puts Money Where Mouth Is By Dropping $5.9 Billion For Colony Industrial's Last-Mile...

A Peek Into The Markets: US Stock Futures Up Ahead Of Producer Price Index

Commentary: The Good And Bad Of Precision Scheduled Railroading

Fed officials feel rates are likely to stay where they are,...