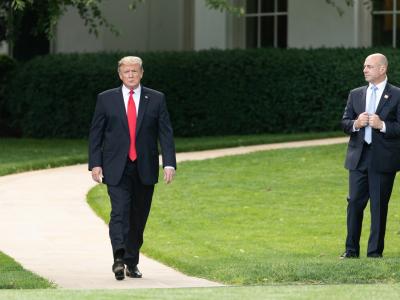 The S&P 500 opened slightly higher Friday to close out another rough week for investors. The major drag on the market remains the trade war between the U.S. and China. Here’s a look at the latest developments.

A week after the Department of Commerce placed Chinese telecommunications giant Huawei on a trade blacklist, President Donald Trump said easing Huawei restrictions could be part of a potential trade deal with China.

“If we made a deal, I can imagine Huawei being included in some form of, some part of a trade deal,” Trump told reporters.

Trump and Secretary of State Mike Pompeo have previously said Huawei poses a serious security threat to the U.S.; the blacklist restricts American companies from selling key components to Huawei.

The move came after the Justice Department filed criminal charges against Huawei back in January, alleging the Chinese company has stolen U.S. intellectual property and violated U.S. sanctions on Iran.

China’s Ministry of Foreign Affairs spokesman Gao Feng said Thursday that the U.S. must “show its sincerity and correct its wrong actions” before serious trade negotiations can resume.

Trump again said Thursday that he plans to meet with Chinese President Xi Jinping at the G20 meeting in Japan in June, but reports from China suggest that meeting may be in jeopardy.

The South China Morning Post reported Thursday that Chinese government officials feel little can be gained at this point from a meeting between Trump and Xi.

“We in the East need to save our face whereas the Americans have complete disregard for that,” said Zhang Yansheng, the chief research fellow at the state-backed China Centre for International Economic Exchanges think tank.

Trump and Xi met at the previous G20 summit in Argentina in December. Since that time, the U.S. has raised tariffs on $200 billion of Chinese goods and threatened new tariffs on an additional $300 billion in goods.

While economists and experts debate which nation is winning the trade war, investors and businesses in both countries continue to suffer.

On Thursday, Trump announced an additional $16 billion in taxpayer bailouts for U.S. farmers impacted by the dispute.

President Donald Trump walks from the Oval Office to the South Lawn of the White House on Monday, May 20. White House photo by Joyce Boghosian.

A Tribute To Dr. Carol Coombes OBE, Who Was At The...