SINGAPORE, May 24, 2019 /PRNewswire/ — Starting next month, users will get a direct say in what projects are listed and when on Huobi Global. 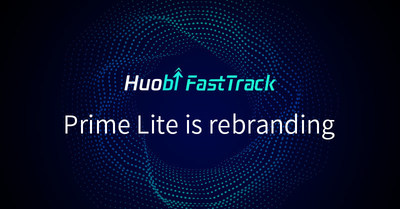 Huobi has revamped and upgraded the business model for Prime Lite, its streamlined launch program for quality crypto projects. Along with that change comes a rebrand and a new name. Going forward, Prime Lite will be known as Huobi FastTrack and, under this new concept, the rules are more favourable to users.

“Huobi FastTrack’s structure grew out of three of Huobi’s guiding values,” said Livio Weng, CEO of Huobi Global. “First, it serves our mission of giving users maximum choice about when and how they can trade; second, it provides much needed exposure to deserving projects; third, it gives everyday traders – not just big fish and major players – exposure to those coins at competitive rates.”

Ross Zhang, Head of Marketing for Huobi Global, provided further insight on the reasons for the rebranding: “The decision to convert to FastTrack really grew out of a desire to be responsive to customers’ needs,” said Zhang. “While many of our users liked Prime Lite, others felt it resulted in too few coins being distributed to too many users, with the result most only got a small proportion of the coins they desired. We also found that too many users were confused by the differences between Huobi Prime, our innovative coin launch platform for emerging new premium coins, and Prime Lite, which was intended as its streamlined cousin.”

In addition to allowing users to vote on what projects they want to see listed (and when) on Huobi Global using Huobi Token (HT), FastTrack also provides discounts of approximately 50% off the market value of launched coins to supporters who vote for them.

Huobi FastTrack is scheduled to launch in June.

How Does Huobi FastTrack Work?

Huobi Global will announce five projects for Huobi FastTrack listing each month. Using HT, users will get a chance to vote for the projects on a weekly basis. Each user can cast his or her votes for a single project every week. The project that gets the highest number of votes will be listed on Huobi Global the same day voting takes place.

Free trading of the winning project token will open upon completion of each week’s voting session, with the simultaneous launch of USDT, BTC and HT trading pairs.

All participating HT voters who voted for a winning project in any given week will be eligible to purchase its tokens at around 50% off market price using the HT they voted with. Of this group, 10 lucky winners will be able to exchange all their HT votes for the winning token. The rest will be able to buy discounted tokens based on the remaining token supply in proportion to their HT votes.

Users will need to hold at least 1,000 HT daily over the week proceeding a Huobi FastTrack launch in order to qualify for voting.

All HT used in the voting phase that is not subsequently used in trading will be returned to users after the Huobi FastTrack launch ends. The HT used by winning voters for token purchases will be burned.

What Is The Benefit To Users, Projects, And HT Holders?

In addition to providing winning voters with access to quality tokens at below market rates, Huobi FastTrack provides all participants with a direct say in what projects are listed on Huobi Global and when. The program will also benefit many deserving projects by providing both much needed exposure and a straightforward listing process. Finally, because all HT spent by winning voters is subsequently burned by Huobi, FastTrack will benefit our long-term HT holders.

How Are Projects Selected For Consideration?

All candidates for FastTrack listing must undergo Huobi’s rigorous SmartChain 2.0 vetting and evaluation process. In addition, successful FastTrack candidates must possess the following:

Projects that meet our listing criteria can submit their project for listing to our dedicated FastTrack Business Support team via Listing@huobi.com.

Huobi FastTrack will work as a complement to, rather than a replacement of, the full version of Huobi Prime and regular listings on Huobi Global.

Disclaimer: Huobi will not, under any circumstances,  provide any trading or financial advice and Huobi users should conduct independent analysis including, where appropriate, taking third party legal, tax and financial advice.  Huobi is limited to users from jurisdictions where digital asset trading is a permissible activity and no regulatory restrictions apply.

Over Eight Billion OmniCoins Were Intentionally Destroyed to Benefit Users

A Peek Into The Markets: US Stock Futures Climb Ahead Of International Trade, Factory...

If the Fed opts for negative rates, it will need to be a 'Hail...