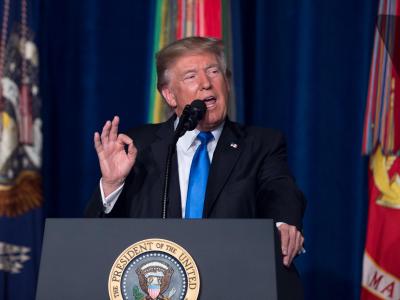 President Donald Trump said he has called off plans to impose tariffs on Mexico, tweeting on Friday night that the Mexican government has “agreed” to stem the flow of Central and South American migrants into the United States.

Mexico “has agreed to strong measures to stem the tide of Migration through Mexico, and to our Southern Border,” Trump wrote. “This is being done to greatly reduce, or eliminate, Illegal Immigration coming from Mexico and into the United States.”

Mexican President Andres Manuel Lopez Obrador also praised the deal, thanking “all Mexicans who made it possible to avoid the imposition of tariffs on Mexico products exported to the United States.”

Trump had announced on May 30 that he would impose a 5 percent tariff on all goods imported from Mexico beginning June 10. The tax on all Mexican products, which would increase every month up to 25 percent under Trump’s plan, would have had enormous economic implications for both Mexico and the United States.

“The President’s threat to impose tariffs on Mexico is a dangerous mistake that will have significant consequences to our economy and negotiations with the United States-Canada-Mexico Agreement,” said U.S. Rep. Henry Cuellar (D-Laredo). “Mexico is America’s leading trading partner, the second-largest buyer of U.S. goods, and the third-biggest consumer of U.S. agricultural products.”

Under the terms of the new immigration agreement, Mexico will assist the United States in curbing migration across the border by deploying some 6,000 National Guard troops to its southern borders with Guatemala, Honduras and El Salvador. The agreement also said Mexican authorities will work to dismantle human smuggling operations throughout Mexico.

Mexico also agrees to accept more migrants seeking asylum in the U.S., according to the deal. In return, the U.S. promises that those asylum applicants will be “rapidly returned” to Mexico as they await the result of their claims.

The proposal from President Trump to impose tariffs on Mexico arose from migrant crossings across the U.S.’s southern borders, which has spiked in recent months. More than 144,000 migrants were taken into custody after illegally crossing the border last month, according to data released by U.S. Customs and Border Protection on June 5.

While the tariffs against Mexico have been turned back for now, trade officials told FreightWaves.com that “the damage has already been done” to businesses that rely on cross-border commerce.

“There’s already been billions of dollars lost because of the delays when Trump took all those (U.S. Customs and Border Protection officers) from us (in April),” said Jerry Pacheco, president of the Border Industrial Association in Santa Teresa, New Mexico. “That presented a challenge to the movement of merchandise because you have fewer lanes open and fewer people processing the cargo.”

Pacheco said before President Trump suspended the threat of tariffs against Mexico on Friday night, carriers and shipping companies were rushing cars, appliances and construction materials across the border last week to beat Monday’s tariff deadline.

“It was an absolutely crazy situation here- the lines were crazy- what’s happening is that there’s a scramble to get merchandise across the border; you are seeing a lot of companies trying to get their trucks across before Monday, in case the tariff is implemented,” Pacheco said. “There isn’t enough docks, warehouses, facilities for all the goods coming into the United States from Mexico right now.”

“We’re all in the same boat, the ports of Santa Teresa, El Paso, Laredo, Nogales (Arizona)- we are all in the same boat when the president does these things, it affects all of us,” Pacheco said. “Even if Trump makes a deal and calls off the tariffs this time, what happens if he decides he doesn’t like this deal anymore and changes his mind in a few months?”

What To Know About Colorado's CO2 Exchange Program Between Cannabis And...