Home Markets Live Feed 'Cannabis As A Force For Good': 2 Massive Cannabis Companies And Their...

It’s the 50th anniversary of the Stonewall riots, and the month of June carries a powerful significance for those in the LGBTQ+ community.

Two cannabis companies have come forward to tangibly demonstrate their commitment to equality for all sexual identities.

PAX Labs, a leading consumer technology company in cannabis, has announced a $50,000 pledge to the GLBT Historical Society in celebration of this year’s Pride to honor the culture and heritage of the LGBTQ community.

“We have immense respect for the LGBTQ community and take pride in the opportunity to honor the movement this month. [The late medical marijuana and AIDS activist] Dennis Peron and others contributed so much to inclusiveness, diversity and advocacy for cannabis accessibility,” PAX CEO Bharat Vasan told Benzinga.

“We believe in the power of community, shared experiences, education and transparency to promote change. PAX is deeply committed to cannabis as a force for good, and we are dedicated to supporting those who drive change for the better as a company and in our communities.”

What The Pledge Means

The pledge from PAX and its brand partners will support the society’s initiative in building the first LGBTQ history museum in the U.S., with a portion of the funds dedicated to building a new exhibit honoring Peron, an LGBTQ activist, author and businessman who was instrumental in the crafting of California’s medical marijuana law. He died in 2018.

The program, in partnership with Juanita More!, Jenny Lewis, and Peron’s spouse John Entwistle, is part of a new campaign: “Be a Force for Good.” It showcases advocacy for LGBTQ rights and celebrates the historical influence of Pride month.

PAX said it will celebrate alongside the community at Pride celebrations this month in Los Angeles and San Francisco. 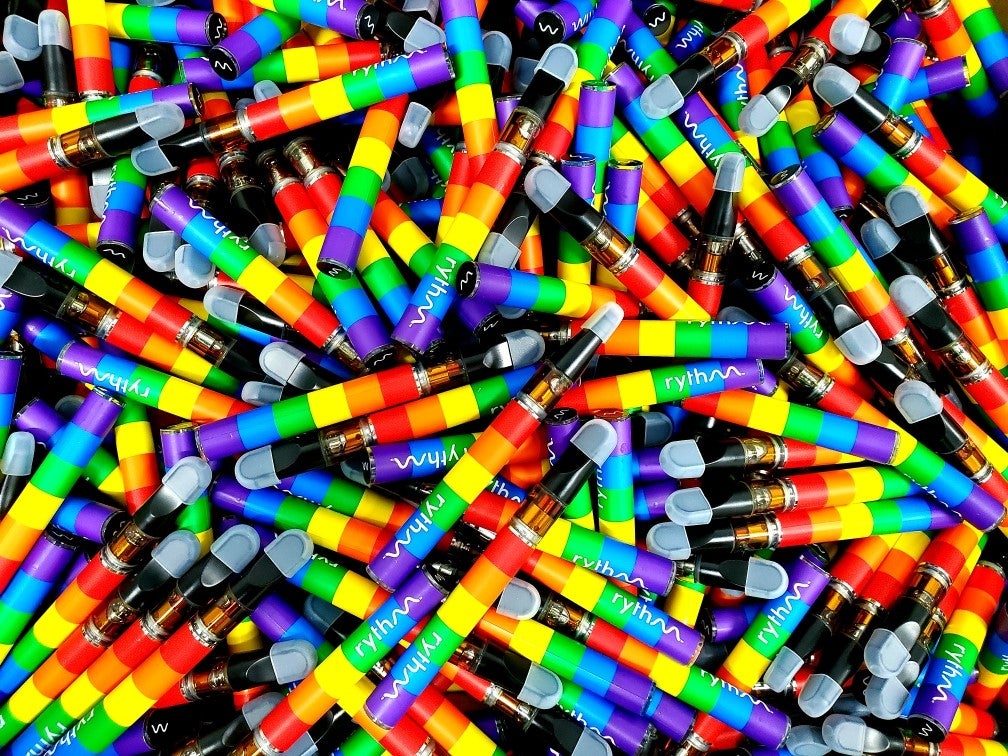 “The road to legal, medical cannabis was paved by activists like Harvey Milk, Dennis Peron, Gilbert Baker and many more who fought for the right to wellness for the HIV/AIDS community in the 1990s.”

Their perseverance changed the future of legal medical cannabis with the passage of Proposition 215 in California, Denton said.

“We are proud to celebrate these heroes and their stories throughout the month of June.”

The Pride-themed pens will be available at all GTI-owned and operated dispensaries in Illinois, Maryland, Massachusetts, Nevada and Florida.  A portion of the proceeds from the Rythm Pride Pens will directly benefit the GLBT Historical Society, according to Green Thumb.

Photos courtesy of the companies.