Picture of a cup of coffee at a Luckin Coffee location.

Beijing-based coffee chain Luckin Coffee is catching the eye of Wall Street analysts who are hoping the newly public company’s technology-driven business model will fuel growth in an underpenetrated coffee market in China.

Luckin, which is the second-largest coffee chain in China, soared nearly 50% on its first day of trading on the Nasdaq in May. Despite the stock being down slightly since then, it has garnered quite a few favorable ratings from Wall Street.

Since Luckin was founded less than two years ago, the company has sold more than 110 million cups of coffee, according to Keybanc Capital Markets. Luckin has opened 2,370 stores in its lifetime and plans to add 2,500 in 2019. More than 90% of its stores are smaller “pick-up” shops designed in close proximity to its customers.

Luckin says technology is the core of its business. The company uses big data analytics and AI to analyze its customers behavior and transaction data.

Its self-developed mobile apps have given Luckin “significant advantages in cost and customer engagement to drive mass market coffee consumption in China” according to Credit Suisse, which has an outperform rating on the stock and a $24 target price. The stock ended the week just above $18.

Similar to other fresh IPOs like Lyft, Uber, and Beyond Meat, Luckin is not yet a profitable company. In 2018, the chain reported net sales of $125.3 million and a net loss of $241.3 million. However, Needham expects the coffee chain’s profit to break even in the third quarter of 2019.

Needham’s Vincent Yu has a buy rating on Luckin Coffee and a target price of $27.

Luckin’s opportunity in China is “one of the world’s greatest retail growth opportunities,” according to KeyBanc Capital Markets, which has an overweight rating on the stock and a $22 price target.

In a tea-dominated culture, coffee is a “highly underpenetrated” market in China, said Credit Suisse.

Coffee sales in China are expected to grow significantly in the next few years, according to market research company Frost & Sullivan, which is cited by many of the analysts covering Luckin.

“We forecast per capita consumption of freshly brewed coffee to accelerate from 1.6 cups per/year per capita in 2018 to 5.5 cups per capita per year in 2023,” the research firm said. 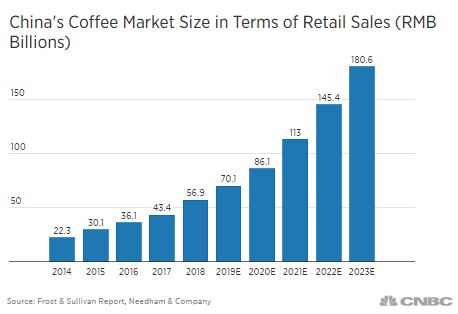 “We believe a faster pace of life, changing consumer habits (younger generation adopting a western lifestyle) and increasing disposable income will continue to drive the growth of the coffee market in China,” Credit Suisse’s Tony Wang said in a note to clients.

Morgan Stanley, which calls Luckin’s stock “high quality, affordable and convenient,” expects Luckin to grow its sales by 30 times between 2018 and 2021, “driven by store expansion, strong customer growth” and “purchase frequency increase.” Morgan Stanley has an equal-weight rating on Luckin and a price target of $21.

A threat to Starbucks

Luckin is attempting to overtake Starbucks as the largest coffee chain in China. Starbucks, which is celebrating its 20th anniversary in China this year, has been building its presence in the world’s second-largest economy for the past couple of decades.

However, Luckin is expected to have more locations than Starbucks in China by the end of 2019, according to Stifel, which put a hold rating on Starbucks citing Luckin’s growth.

In China, Starbucks is leading in the taste and mobile app categories in terms of sales drivers; however, competitors of Starbucks, which includes Luckin, are leading in the service, convenience and price categories, according to a Citi Research study.

Earlier this year, Starbucks chief Kevin Johnson said it is “unlikely” that Luckin surpasses Starbucks by the end of 2019.

Commentary: China's Investments And Influence In Panama – Problems Ahead For...

China Has Three Times More Blockchain Patent Filings Than US