After several days of lackluster trading, it feels like there’s a little more energy in the air today as the Fed begins its two-day meeting. The positive vibe stemmed partly from comments European Central Bank (ECB) President Mario Draghi made Tuesday about the possibility for more stimulus.

European stocks ricocheted from losses to gains after Draghi spoke, and U.S. markets appeared to also catch the wave in pre-market trading. We’ll have to wait and see if this rolls on as the day continues, because traditionally the two days of a Fed meeting are pretty slow and featureless.

As the Fed begins its deliberations, the futures market still suggests low odds of any rate move this week. However, those chances moved solidly higher over the last 24 hours, to nearly 30%. That compares with 15% as of late Monday.

If stocks end up rallying on hopes of the Fed cutting rates, it might be worth keeping some perspective. A rate cut still seems unlikely tomorrow, but if it does happen, it’s likely a reaction by the Fed to what it sees as a slowing economy. The “good news” is “bad news” scenario discussed here last week still holds. Many economists see Q2 U.S. gross domestic product (GDP) and earnings growth slowing from Q1, and that’s not such a good thing.

Recent manufacturing and jobs data haven’t been as strong, and the European and Chinese economies are taking a beating. Tariffs still overhang everything, with the threat of more to come. The real story might be told next month when earnings season starts and investors begin hearing from CEOs about the economic climate.

On the corporate news front, Facebook Inc (NASDAQ: FB) shares got some buzz this morning as FB launched a new cryptocurrency called Libra. Oracle Corporation (NYSE: ORCL) shares fell in pre-market trading after an analyst downgrade. The “FAANG” stocks, which FB is one of, were among the market-leading areas Monday, so we’ll see if that has any legs.

U.S. housing starts for May released early Tuesday beat analysts’ expectations, coming in at 1.269 million. That compared with the consensus of around 1.24 million. One data point isn’t a trend, but this does look like a bit of positive news for the economy.

“Range-bound” became more than a saying this last week. It started to look like a way of life.

Over the four sessions starting last Wednesday, the S&P 500 Index (SPX) has barely moved. The low over that stretch was 2874 on Wednesday, and the high was 2897 yesterday. So in four days of trading, the SPX stayed locked in a 23-point range, or well below 1%.

This kind of dull, directionless trading isn’t too uncommon heading into a Fed meeting, though it’s seldom this pronounced. Maybe things will get more exciting once Fed Chair Jerome Powell and company finish pondering the economy and get out in front of an audience tomorrow afternoon. The Fed’s decision is scheduled for 2 p.m. ET Wednesday.

A lot of the talk so far ahead of the Fed meeting centers on hopes among some investors that the Fed might not cut rates, but at least could hint at possible future cuts. However, some analysts have said the Fed might disappoint people who are thinking that way. The Fed could want to get a look at what happens at the G20 conference next week before making any big moves or even hinting at its next step, according to this school of thought.

The economy, on the other hand, does appear to be slowing, so that’s a tack the Fed could conceivably take if it delivers any dovish language tomorrow. Short of actually saying it’s considering a rate cut, the Fed might let its “dot plot” do the talking. Many analysts expect this chart of future rate projections to take a noticeable downward curve from where we last saw it back in March, based on slowing U.S. and global growth.

The futures market sees odds of at least one rate cut by the July meeting at 88%, and chances of at least one cut by September at 97%. The only question, if we take the futures market as a good predictor, is exactly how much the Fed might move. There’s a better than 75% chance of rates falling 50 basis points from current levels between now and September, futures prices indicate, though it looks like it would happen in separate moves, not all at once.

G20 Another Overhang After Fed Meeting

The other major overhang is next week’s G20 meeting. That one is closely associated with the trade situation, and if there’s no progress—or worse, a rise in tension between China and the U.S. coming out of that gathering—it might be tough on Wall Street. On the other hand, one might argue that a potential negative outcome could already be having an impact, with few investors apparently eager to buy at these relatively lofty levels when the trade situation is still out there.

U.S. Treasury yields, for one, don’t seem to be making the case for a quick turnaround on trade. They dropped to a new low for the year of 2.03% as rate cut odds moved higher. A lot of the pressure on yields might be associated with investors dialing in potential rate cuts in coming months. Weak data like Monday’s surprisingly soft Empire State Manufacturing Survey might also play into the low yields, and into hopes for a quicker move by the Fed.

Today’s housing numbers aren’t the last housing data of the week. Friday is scheduled to bring existing home sales for May. The question going into that one could be whether falling mortgage rates this spring got more people out to those open houses. On the other hand, nasty weather around much of the country might be a weight on that market.

Wednesday and Thursday have a couple of earnings reports on the calendar, including Oracle (NYSE: ORCL) and Kroger Co (NYSE: KR). See more on ORCL below.

With the market in such a tight range, it might not come as too big a surprise to hear that volatility as measured by the Cboe Volatility Index (VIX) has also been pretty flat over this stretch, oscillating between 15 and 16. It hasn’t moved above 17 or below 15 since June 4.

The question might be what happens next once the Fed meeting gets out of the way. Some choppiness might come back with the end of the quarter and the G20 meeting both looming, especially as we get into next week, but we’ll have to wait and see. For now, it seems like the SPX is well enclosed in that range between the 50-day moving average of 2874 and psychological resistance at 2900, a level it’s tested several times lately without being able to close above.

Meanwhile, crude also appears to be in a range of between roughly $51 and $53 a barrel for U.S. front-month futures. The price sank back to near the bottom of that range Monday despite no sign of easing tension between the U.S. and Iran. 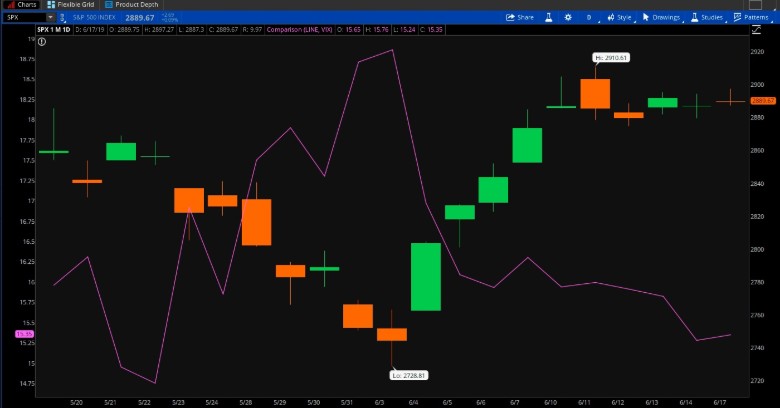 Figure 1: STUCK IN PLACE: Looking for trading excitement? It’s been very hard to find the last few days. This chart of the S&P 500 Index (candlestick) and the Cboe Volatility Index (purple line) shows just how much things have flattened out over the last month as investors await the Fed meeting and next week’s G20 gathering. Data Sources: Cboe Global Markets, S&P Dow Jones Indices. Chart source: The thinkorswim® platform from TD Ameritrade. For illustrative purposes only. Past performance does not guarantee future results.

Curtain Call: With just a couple of weeks left in the quarter, we could be heading into a little seasonal volatility. It’s around now that some fund managers tend to engage in a time-honored practice called “window dressing.” No, we’re not talking about choosing the right shades or curtains. It’s a practice designed to make their clients’ portfolios look more palatable before those quarterly progress reports go in the mail (or now, the virtual mail). This means you could see some money shifting out of some of the poorer-performing sectors into some sectors that have more shine, and into some stocks with big recent gains.

The result, at times, can be further gains for stocks and sectors that already are doing well, and more pressure on poor performers. Sectors with more glowing records lately include Health Care, Real Estate, and Materials. Poor performers over the last month include Energy, Communication Services, and Industrials.

Oracle Steps to the Plate Tomorrow: While most people are watching the Fed closely tomorrow, that might not include the executives at Oracle Corporation (NYSE: ORCL). They’ll be getting ready to share earnings after the close that afternoon. Most analysts expect a year-over-year revenue dip, although they also expect earnings per share (EPS) to rise in ORCL’s fiscal Q4. Guidance is likely to also get a close look, with the company saying last quarter that it expects double-digit EPS growth during the fiscal year.

Over the last year or two, we’ve often seen companies that report lower revenue get hurt a bit in the market. That means if revenue falls, investors might want to consider checking closely to see if ORCL had a corresponding cut in expenses during the quarter. Or, if expenses grew, can the company really justify that growth? ORCL is a major player in cloud computing, a sector that’s seen growing competition lately. The company’s earnings could give investors a bit more insight into whether slowing international growth and tariffs might be affecting that industry.

Rough Spring For Ag Market: Has the spring weather been disappointing? Think of the Midwest farmer. U.S. farmers are expected to harvest the smallest corn crop in four years, according to the U.S. Department of Agriculture. The USDA recently reduced its planting estimate by 3.2% from May and its yield estimate by 5.7%, CNBC reported.

Though you may not trade corn and soybean futures, the flooding that’s hurting farmers might also hurt some of the companies that depend on farmers for revenue. Seed companies come to mind, though the name of one might not be familiar. Corteva Inc (NYSE: CTVA)  is the agricultural spin-off of the former DowDupont (NYSE: DD), and became a public company on June 3. After a nice jump on its first trading day, the stock has fallen 7%. Farm equipment maker Deere & Company (NYSE: DE) is another company that analysts think might suffer if this bad spring weather leads to poor crops. Shares of DE fell sharply in May but have bounced back a bit since and are roughly flat year-to-date.