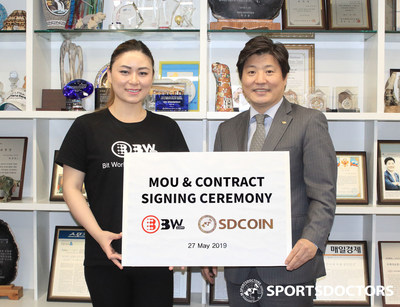 Headquartered in Hong Kong, BW.com is an exchange operated by ZB Foundation and is well-known for listing only proven cryptocurrencies that pass strict standards. BW.com, which is highly regarded for its safety with no hacking accidents so far, is ranked 5th globally for its trading volume by CoinMarketCap, the global cryptocurrency data provider, and is also well-known as the world’s three largest mining pool operators.

Cathy Zhu, the Chief Operating Officer (COO) of BW.com, who recently visited Korea, revealed the reason of SDCOIN’s listing. “I highly value the potential of the global medical network built by SportsDoctors, the network scalability in the Fourth Industrial Revolution era, and the possibility of simultaneous development of medical coin and donation coin.”

In addition, she added that the healthcare data created by the medical support activities has a significant future value as it can also be used for the development of new drugs that treat genetic diseases and incurable diseases.

Joon-Young Heo, SportsDoctors President, Chairman of MyGroup (mypharm, myenc, mydesign), which sponsored the development of SDCOIN, registered for UN PDI in 2003 and grew into the world’s largest international healthcare NGO with 1 million medical staff including Korean Hospital Association and Korean Medical Practitioners Association, and a network of 21 million business agreement members. It has achieved 3,200 domestic and overseas medical support actions this month.

“SDCOIN will create a coin ecosystem by linking individual disease history, treatment history, and life logs built up through medical support projects around the world to the blockchain. Based on this, SDCOIN will develop real coins that can be used in hospitals and medical support sites both at home and abroad,” said Joon-Young Heo, President of SportsDoctors. According to him, the proceeds of SDCOIN will be used to build hospitals around the world, secure medical resources, and provide emergency relief supplies.

Meanwhile, SDCOIN Corp., which has signed a listing contract with BW.com, donated a portion of the proceeds to SportsDoctors and started its actual goal of “Medical support to save life in the global village.” SportsDoctors is making an effort in promoting through an ‘Air Drop Event’ that presents SDCOIN, equivalent to half of the donation, to sponsors including individuals, corporations, institutions, etc.

The Dow was perfectly unchanged on Tuesday, a rare occasion on Wall Street