Even the slightest hint of warmer trade winds is enough to get investors’ hearts beating a little faster these days as the G-20 meeting approaches.

You can see that Wednesday morning as the stock market made a mild rebound thanks in part to some optimistic comments from U.S. Treasury Secretary Steven Mnuchin, who said he thinks there’s a “path” to complete a trade agreement and that the U.S. and China had been 90% of the way to a deal.

With President Trump and President Xi meeting in just a few days, Mnuchin’s words sparked some optimism in a market that’s lacked it the last few days. The positive thing is that Mnuchin talked about the two countries being 90% there. However, considering this is exciting news, the reaction is still somewhat muted in the market. That could be due to the fact that we’ve had so many false positives. Maybe investors are starting to get to the point where they need to see proof.

Yesterday’s slide came as hopes for a dramatic 50 basis-point rate cut next month got talked down by Fed officials (see more below). We’re in a situation where  at least a 25 basis-point cut is expected in July, and that’s currently fully priced into probabilities. Anything less could lead to a large potential sell off.

Positive news came after the close yesterday with earnings from semiconductor firm Micron Technology, Inc. (NASDAQ: MU). The company beat Wall Street analysts’ estimates on both earnings and revenue, and MU stuck with its forecast for a second-half rebound in the memory chip market.  Shares rose nearly 9% in pre-market trading, so we’ll see if that translates into wider strength across the semiconductor sector.

With NKE, things to consider watching include North American sales—which showed signs of slower growth in the previous quarterly report—and sales in China, which were off the charts earlier this year.

There’s something we’ve seldom seen before going on: A public battle of words between the Fed chairman and the president of the United States. It’s creating some uncertainty—never a welcome thing for the markets. This uncertainty helped contribute to the worst day of June on Tuesday for major indices.

Fed Chair Jerome Powell’s speech Tuesday where he emphasized the Fed’s independence from politics and said the Fed is “grappling” over policy came not long after President Trump—who’s encouraged rate cuts—warned that he could fire Powell if he wanted to and said the chairman hasn’t done a good job.

The market seemed to react negatively to this scuffle, extending early losses Tuesday when Powell spoke. Powell’s use of the word “grappling” got some attention, because many people had been pretty sure a rate cut was in the cards. Now it sounds like he’s hedging his bets. Powell also used the word “patient,” which was absent from the Fed’s policy statement after last week’s Federal Open Market Committee (FOMC) meeting.

With a lot of the recent rally built on big hopes for a rate cut in late July, the market could be vulnerable to any hint it won’t get what it seems to want. The S&P 500 Index (SPX) is up about 16% so far this year, with a large chunk of that rally happening over the last month. The SPX is outpacing earnings growth in a major way, with many analysts expecting S&P 500 earnings per share to rise only around 2% in 2019.

This suggests that the market has built a lot of rate cut hopes in. Any sign of the Fed potentially pulling back the cookie jar could cause some people to look at valuations and wonder if maybe the market got a bit ahead of itself. Arguably, there’s little room for error with stocks trading this high. On the other hand, it might help to have a bit more perspective here. If Powell thinks maybe a rate cut isn’t a slam dunk, it could mean he sees more strength in the economy than analysts and investors give it credit for.

Some analysts think Powell’s speech might have been designed to send a message that the Fed isn’t necessarily going to do anything dramatic like cut rates 50 basis points instead of 25. One of the Fed officials who many think of as a “dove,” James Bullard, said in an interview Tuesday that a 50 basis-point cut would be “overdone,” so there you have it.

There was a more than 40% chance of a 50-basis point July cut built into futures prices going into the day Tuesday, but that fell to 26% by early Wednesday after Powell’s speech. The market still anticipates 100% odds of a rate cut at the July Federal Open Market Committee (FOMC) meeting. Any signs of that potentially changing could cause more damage to the rally.

Putting on the VIX

Volatility, which was already elevated, jumped again around the time of Powell’s remarks, with the Cboe Volatility Index (VIX) rising above 16.50 for a bit before coming off of its high later in the day. It eased back below 16 early Wednesday, but that’s still pretty high compared with lows below 12 earlier this year.

Looking at the technical picture, it seems like there could be support for the SPX down around the psychological 2900 mark, and below that at the 2879 level, which is the 50-day moving average. A downward move earlier this month failed to really find much selling interest below the 50-day. One takeaway Tuesday might be that the SPX continues to get into thin air above 2930, a level it has topped three times in the last year but hasn’t spent long above.

FAANGs also took some heat, with Amazon.com, Inc. (NASDAQ: AMZN) and Alphabet Inc (NASDAQ: GOOG) under a lot of pressure. Only one FAANG stock (GOOGL) has made a new all-time high this year despite the SPX making several. Investors just haven’t jumped back in to the FAANGs with both feet, a sign maybe of growing U.S. regulatory concerns around some, including Facebook Inc (NASDAQ: FB) and GOOGL, and trade concerns around others, like Apple Inc (NASDAQ: AAPL).

Another big name taking a dip on Tuesday was Microsoft Corporation (NASDAQ: MSFT), which some investors have gravitated toward recently amid talk that software firms might be less vulnerable to trade headwinds. A negative analyst note appeared to hurt shares. 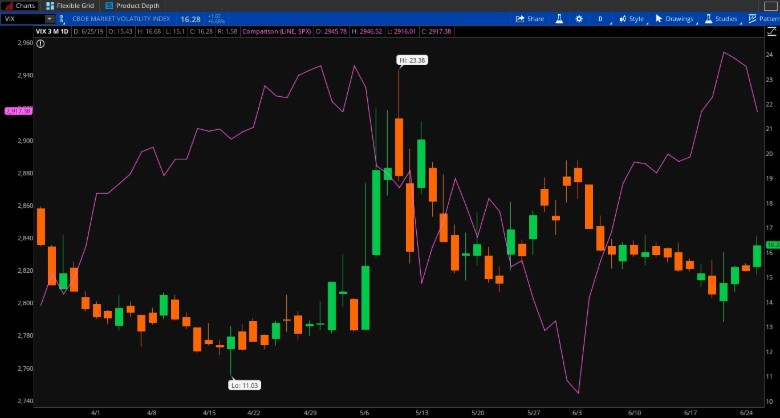 Figure 1: NO RETREAT OR SURRENDER: The Cboe Volatility Index (candlestick) continues to be elevated, though it’s down from the May highs. Even with the S&P 500 Index (purple line) rising to new record highs this month, the VIX hasn’t gone back toward its April lows. This could reflect continued investor caution and concern around the trade situation. Data Source: Cboe Global Markets, S&P Dow Jones Indices. Chart source: The thinkorswim® platform from TD Ameritrade. For illustrative purposes only. Past performance does not guarantee future results.

Next Jobs Report Could Be Critical: Just over the horizon sits the next jobs report, due a week from Friday. That’s the day after a market holiday, and the low-volume, holiday-type trading that frequently happens around Independence Day could play into how the market reacts to the numbers. Arguably, this could be one of the most important jobs reports in a while, and it’s one of those that could send the market either spiraling or rocketing. Any reaction could be more dramatic than usual with so many investors away from their desks for the long weekend, so it might be prudent to take extra care if you’re considering making any trades around that time.

What potentially makes the June jobs number so influential is that it comes after a weak report in May showing just 75,000 jobs created. The Fed came out soon after that and said it sees signs of slowing in the economy, so another weak jobs report for June might reinforce worries that a slowdown is underway. We’ll talk more in the next few days about the report and its possible ramifications, but it’s just one of those things to consider keeping in mind, especially if you’re going to be around for the holidays and planning to make any trades.

Double Trouble: Investors hoping for signs of life in the U.S. economy got slammed with a double blow of bad news early Tuesday when the Conference Board reported weaker than expected consumer confidence for June and new home sales for May came in well below Wall Street’s expectations. It looks like trade worries are starting to weigh on consumer confidence, while new home sales fell nearly 8% from a year ago despite lower mortgage rates over the last few months.

Next up on the data calendar is the government’s final estimate for Q1 gross domestic product (GDP), due early Thursday. The consensus estimate is no change from the 3.1% reported last time out, according to Briefing.com. Looking ahead to Q2, the Atlanta Fed’s GDP Now forecast model still stands at 2%, but is due for an update today. Up or down? Let’s wait and see.

Housing Headwind: Those weak new home sales coincided with a couple of home-builders’ earnings reports this week, including KBH today. In its earnings call Tuesday, Lennar Corporation (NYSE: LEN), the second-biggest home-building company, said the impact of tariffs on Chinese goods represents about a $500 per home headwind, on average. It’s one of the many ways tariffs work themselves into the economy. When people think of tariffs, they might have big-ticket items like cell phones and farm products in mind, but U.S. trade with China gets down to many little products, too. A lot of those smaller things end up in new homes. Last year, the National Association of Home Builders reported that of the 6,000 items on the list of goods imported from China that are now subject to tariffs, 463 are “ubiquitous” in home construction and remodeling, the Washington Post said. This includes products ranging from iron nails to flooring to granite countertops, tiles, sinks, roofing, cement, paints, cabinets, wooden and steel doors, windows, lighting, appliances, and much more.

California Wildfires Could Be Even Worse This Year

What A Fine Mess We Have Gotten Ourselves Into