Home Markets Live Feed OPEC may be upstaged by the G-20 this weekend in terms of...

OPEC ministers meet Monday, but this weekend’s G-20 leaders summit could have much more impact on oil prices, depending on whether the outcome is good or bad for the global economy — and therefore oil demand.

The world’s markets are focused on Saturday’s meeting between President Donald Trump and China’s President Xi Jinping to see if the two will agree to some type of trade truce and continue negotiations towards a broader deal. In the oil market, the trade wars have taken a toll on end demand in important markets like Europe and Asia, and that dynamic has helped hold down prices even as tensions between the U.S. and Iran flare up.

OPEC brings together a room of personalities and interests, and oil market pros are watching the dynamic of the relationship between Russia and OPEC, especially Saudi Arabia, and the strained relations between Iran and other OPEC members. Iran is suffering under U.S. sanctions and has threatened to begin enriching uranium at a higher level, which could hurt its agreement with countries that remain in the nuclear agreement the U.S. dropped out of last year.

Iran has also been blamed for attacking Saudi oil assets, including two oil tankers. Last week, President Donald Trump aborted what could have been a retaliatory attack on Iran for shooting down a U.S. drone.

“I don’t think you want to get in between the dueling glares of the Saudi and Iranian oil ministers. I’m sure the enmity is palpable,” said John Kilduff of Again Capital.

“In the broader context of what can make oil move, I think OPEC is pretty proforma. We think they’ll roll this deal over,” said Helima Croft, head of global commodities strategy at RBC. “There are war drum beating in the background, and there is no offramp for this.” 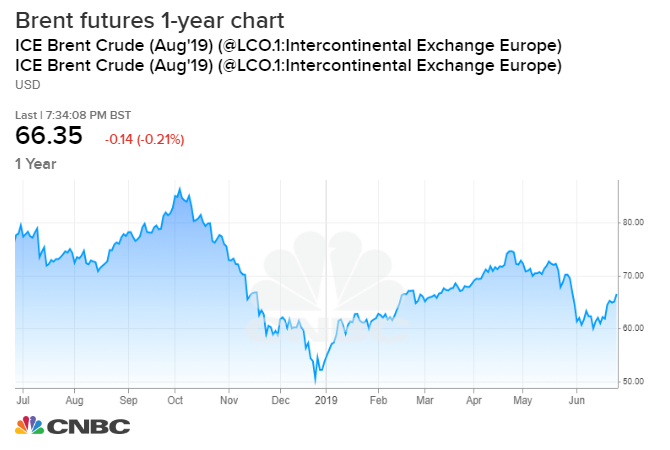 Analysts mostly expect oil to trade above current levels for the balance of the year, with Brent prices expected over $70 a barrel, and WTI closer to $65. It could be a turnaround in the trade outlook that helps drive prices higher, along with the reduction in crude from Iran and other producers. Another factor hanging over the market is the potential for more events in the Gulf region, like the recent attacks on oil tankers and other assets that the U.S. blamed on Iran.

“At this point, I think oil traders have gotten their heads around a trade war, so they’re failing to understand what the degree of risk is entailed in escalation in the region,” said Croft.

Even as the oil industry heads to Vienna for the two day OPEC gathering, Russian President Vladimir Putin is expected to meet with Saudi Arabia Crown Prince Mohammed bin Salman, or MBS, on the sidelines of G-20, being held in Osaka Friday and Saturday.

Saudi Energy Minister Khalid Al-Falih is also expected to meet his counterpart Russian Energy Minister Alexander Novak, who said Thursday he believes there will be an agreement on their output deal in Vienna.

“That’s where we’ll get an early read as to whether the ‘plus’ part of the equation stays in the equation,” said Jan Stuart, global energy economist with Cornerstone Macro. “I think that’s a big deal, so the G-20 is important.”

Stuart said OPEC and Russia were expected to move toward a more formal relationship but so far that has not happened.

“OPEC seems to be a small part of this nascent Saudi Russia relationship. I still think that things had hit a point at which it becomes important for the sovereigns to reaffirm what it’s all about, and I think that’s what G-20 is about,” Stuart said.

Citigroup’s Edward Morse said Russia may have expected more from the relationship by now. “So far, the Russians have been frustrated by a lack of progress in commercial relations between the two countries,” said Morse, global head of commodities research. He said projects like a military defense system, thwarted by the U.S., and a commercial LNG deal have not come to fruition.

The increase in U.S. output and market share could become a thorny issue for Russia and OPEC, as they rein in production. “What’s happening to demand is really on the minds of both Russia and Saudi Arabia. And the Russians for their part are concerned about making more room for the continual growth in market share of U.S. oil,” said Yergin.

The U.S. has leapfrogged both Saudi Arabia and Russia to become the world’s largest oil producer in a relatively short time, as the U.S. oil industry became more proficient at extracting oil shale and in horizontal drilling.

He said Russia has become more compliant with the output cut simply because it continues to have problems with the Druzhba pipeline, which was found to be exporting contaminated oil in April from the Urals to Eastern Europe.

Morse said Russia’s exports could even be more limited because of problems at a Black Sea port facility, expected to be closed until next month after contaminated crude was also found there.

Kilduff said the relationship between the two producers is strained, in part because Russia’s oil companies are not interested in remaining in a deal that reduces output.

“They have no desire to lose even more market share. Increasingly, barrels of U.S. crude oil are showing up in Asia, which is Russia’s backyard,” said Kilduff.

Yergin said the Saudis and Russians have reason to stick together.

“The Russian Saudi relationship has continued to evolve. It has a geopolitical context to it, and it has an investment context to it.I think the Saudis hope the Russians can have some influence on Tehran,” said Yergin.

When OPEC meets next week, there will also no avoiding the awkward issue of Iran. The U.S. squeezed Iran further recently by denying waivers for some Iranian customers, and now some analysts say Iran’s exports could be well below 500,000 barrels a day, down from more than 2 million barrels a day.

“The only thing we don’t know is what Iran is going to say…I think that’s a wild card. I think if Iran says they’re not going to go along, and there’s some precedence for this, the others will say we’re going ahead anyway,” said Morse.

“I think they’re going to say their piece but I don’t think it’s going to impact the rollover decision,” said Croft.

Oil prices have rebounded in June after suffering a steep slide from late April through May, as trade talks between the U.S. and China derailed. Brent crude, the international benchmark, is up about 6% for the month, and Brent futures were trading around $65.70 Thursday. West Texas Intermediate futures were up more than 11% for the month, and were trading just under $60 per barrel Thursday.

Analysts say the G-20 could be a positive turn for the oil market, if Xi and Trump can make a public statement, indicating there is a truce on trade and no more tariffs will be imposed while a bigger deal is negotiated. That is the broad expectation of economists and strategists following the talks, but news reports on Thursday indicate Xi has a list of conditions that might be difficult to get agreement on, including the U.S. removing a ban on Huawei and lifting all tariffs.

“We’ve held this view that oil prices are currently below the fair value as suggested by the supply demand balances. The market went overboard in terms of how weak the demand was perceived to be,” said Singh. “Nothing really changed on the supply side.” He expects Brent to average around $73/74 for the balance of the year.

As Iran’s oil came off the market, U.S. producers continue to increase output and the U.S. is now producing about 12.3 million barrels a day, recently exporting about 3.5 million of those barrels.

Does Weed Help With Asthma? Or Does Cannabis Make It Worse?

Barclay CTA Index Up 0.98% in July According to Backstop BarclayHedge,...