Exposure to equity markets decreased in TD Ameritrade client accounts during the June IMX period. The IMX score decreased by 6.49%, moving to 4.61, down 0.32 from the previous period. 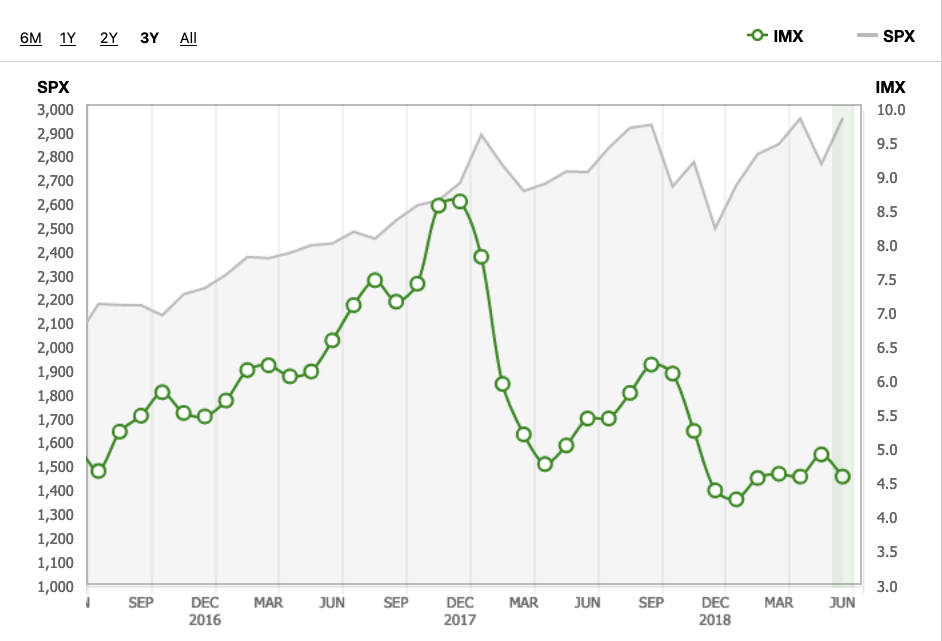 Equity markets headed higher during the June IMX period on mixed economic data. The S&P 500 and Dow Jones Industrial Average were both up around 7%, while the Nasdaq Composite was the leader, up 7.4%. The 10-year U.S. Treasury yield decreased below 2% for the first time since November 2016 while the Conference Board’s consumer confidence index decreased to the lowest point since September 2017 as the escalation of trade and tariff tensions appeared to have shaken confidence. Market gains were helped mid-month as Federal Reserve officials agreed to hold their benchmark interest rate steady, and hinted at possible rate cuts in the coming months if the economic outlook weakens. At the end of the period, the Group of 20 summit began, with an expected meeting between President Trump and Chinese President Xi Jinping regarding trade relations.

TD Ameritrade clients were net sellers of equities during the period, but found some names to buy. Tesla Inc. (NASDAQ: TSLA) traded higher during the period on hopes of a good second quarter and reports the company is developing their own battery cells, and was net bought. Plant-based meat maker Beyond Meat Inc. (NASDAQ: BYND) was net bought as it announced its launching a new, plant-based ground beef product designed to look and taste like traditional ground beef, which will be available at stores including Whole Foods (owned by Amazon.com, Inc. (NASDAQ: AMZN)), Albertsons, and Kroger Co. (NYSE: KR). Alibaba Group Holding, Ltd. (NYSE: BABA) launched an English language portal on its Tmall retail site for the first time in a bid to double the number of global brands for sale to Chinese consumers, and was net bought. Marijuana stock Canopy Growth Corp. (NYSE: CGC) was volatile after reporting decelerating revenue during the previous period, while the CEO projected higher margins going forward, and was a net buy. Walt Disney Co. (NYSE: DIS) hit an all-time high during the period as Toy Story 4 was released during the period, and was net bought.

Inclusion of specific security names in this commentary does not constitute a recommendation from TD Ameritrade to buy, sell, or hold.

TD Ameritrade’s Investor Movement Index (IMX) has generally correlated with the S&P 500 as clients react to equity price movements, but the index has gone through uncorrelated periods. Beginning in January 2010, when TD Ameritrade started tracking the IMX, the index rose with equity markets until April 2010, when it peaked at 5.40. In May 2010 investors experienced the “Flash Crash” and the IMX began a sharp downward trend. The IMX didn’t reach 5.00 again until the S&P 500 was well above April 2010 levels. The index eventually peaked at 5.56 in June 2011. This peak was immediately followed by a plunge in equity markets, and in the IMX, as the media was dominated by the U.S. debt ceiling debate, S&P downgrade of U.S. debt, and European debt concerns. The S&P 500 began to recover in the fall of 2011, but the IMX continued to decline until it reached a new low at the time in January 2012. As the S&P 500 began to sustain an upward trend in early 2012, the IMX started to rise. In 2013, as economic conditions improved and the S&P 500 climbed to record levels, the IMX rose to the high end of its historical range, finishing 2013 at 5.62, and continued to rise in 2014 amid geopolitical tensions related to Ukraine and the Middle East, until seeing slight declines in October and November. By the middle of 2015 the IMX had seen increases, as equity market volatility had reduced to near historical levels while the market continued its upward trend. As 2015 ended its third quarter, volatility had returned to markets, as global economic concerns and speculation around the timing and trajectory of Federal Reserve rate increases seemed to rattle overall equity markets. This uncertainty continued to play a role in the equity markets through the fourth quarter of 2015 and into early 2016. The volatility accompanying this uncertainty abated in the second quarter of 2016 and remained low until late in the third quarter.  Just as it had in 2015, the IMX saw increases mid-year during the period of lower volatility. The IMX continued to climb into the fourth quarter reaching 5.83 in October 2016, its highest point in two years. A brief spike in volatility during November, timed around the U.S. presidential election, coincided with a slight pull back in the IMX, which then ended 2016 at the high end of its historical range. The IMX started 2017 with an upward trend and reaching an all-time high in March, before pausing in April as lower volatility lead to a decrease in the IMX. The momentum resumed in May, with the IMX breaching 7.0 for the first time ever in July of 2017. The IMX took another brief pause in September, before following markets higher and breaching 8.0 for the first time ever in November and ending 2017 at an all-time high. Volatility returned to the markets in early 2018, and the IMX decreased for four consecutive months to start the year. The IMX then rebounded in the spring of 2018, and continued higher during the summer on the back of better-than-expected earnings and increasing equity markets. The IMX headed higher during the fall of 2018 as economic growth increased before heading lower in late 2018 as the Nasdaq Composite entered a bear market to end the year. Geopolitical issues were in the headlines during early 2019 as the U.S. and China traded tariffs. The IMX rebounded along with equity markets in the spring of 2019 on optimism of a trade deal with China and the unemployment rate nearing a 49-year low.

All investments involve risk including the possible loss of principal. Please consider all risks and objectives before investing.

Past performance of a security, strategy or index is no guarantee of future results or investment success.

The IMX is not a tradable index.

The IMX should not be used as an indicator or predictor of future client trading volume or financial performance for TD Ameritrade.

Goldman is bringing traders back to offices in New York and London in the...

A pedestrian passes in front of 200 West St., which houses the headquarters of Goldman Sachs Group, in New York. Scott Eells | Bloomberg |...

US trade office gets ready to impose tariffs on another $300...