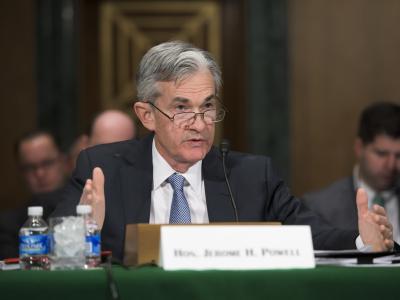 Powell presented his semiannual monetary policy report to the House Financial Services Committee on Wednesday, and investors have now high hopes for a rate cut before the end of the month.

Last month the Fed opted to once again defy President Donald Trump and maintain interest rates. However, Powell said on Wednesday the slowing business investments and reemerging “crosscurrents” have strengthened the case for dovish monetary policy since the last Fed meeting.

“Many FOMC participants saw that the case for a somewhat more accommodative monetary policy had strengthened. Since then, based on incoming data and other developments, it appears that uncertainties around trade tensions and concerns about the strength of the global economy continue to weigh on the U.S. economic outlook,” said Powell.

After the last Fed meeting, Trump ripped the Federal Reserve, which he said “doesn’t know what it’s doing.”

….Think of what it could have been if the Fed had gotten it right. Thousands of points higher on the Dow, and GDP in the 4’s or even 5’s. Now they stick, like a stubborn child, when we need rates cuts, & easing, to make up for what other countries are doing against us. Blew it!

“I’m not happy with his actions,” Trump said of Powell in a recent NBC interview. “No, I don’t think he’s done a good job.” Trump appointed Powell as the replacement for former Fed chair Janet Yellen in February of 2018.

Despite Trump’s criticism, White House economic advisor Larry Kudlow told CNBC this week Powell’s position as Fed chair is safe “at the present time.” Powell said Wednesday he would not resign if asked to do so by Trump.

“Weak ADP report and Friday’s jobs report will be key factors in determining if there will be an interest rate cut and by how much,” Catrambone said.

Powell said last Friday’s relatively strong U.S. jobs report had no impact on the Fed’s economic outlook. While the U.S. economy is performing relatively well, he said weakness in Europe and Asia is an ongoing concern. Powell also said that while U.S. unemployment remains low at 3.7%, wage growth is not indicating an overheated jobs market and inflation “continues to be muted.”

Although Powell’s testimony wasn’t particularly surprising, stock prices reacted favorably to the news. The SPDR S&P 500 ETF Trust (NYSE: SPY) and the SPDR Dow Jones Industrial Average ETF (NYSE: DIA) both traded higher by 0.3%, with the S&P 500 topping 3,000 for the first time ever.

Facebook, Inc. (NASDAQ: FB) was higher by 0.6% on the day, but traded off its highs after Powell said the company’s Libra cryptocurrency “raises serious concerns,” such as the potential for large-scale money laundering. Powell said the approach to regulating Libra should be a “careful one.”

Tanzeel Akhtar contributed to this report.

GWR's Lower Than Expected Earnings Due To Weather, But Guidance And New Business Pipeline...

How to make 2020 the year you start building wealth

A legendary trader who made billions betting on wars, other macro...