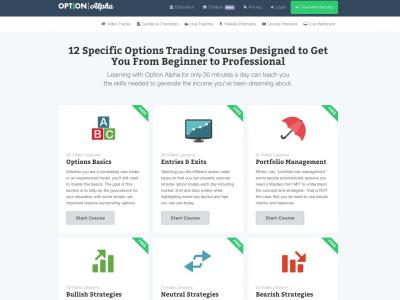 In an interview with Benzinga, Kirk Du Plessis, the founder of the education and technology platform Option Alpha, detailed the company’s partnerships with brokers like TD Ameritrade Holding Corp. (NASDAQ: AMTD) and the offerings from its automated trading and crowdsourced intelligence platform.

As Plessis traded, he kept a public journal. With time, he said he received inquiries for trading assistance.

The trader said he thought: “well, crap, maybe if I [make] a couple videos like what an option is, what a delta is, I won’t get as many emails.”

The videos eventually evolved into courses on trading.

The courses cover everything from option basics to strategies. The website also offers e-books, podcasts and live webinars.

The platform is free with the exceptions of notifications, daily trades, priority support and Q&A calls.

The month-to-month paid memberships are priced at $299 for Elite and $99 for Pro.

“One of our big things that we launched two years ago was a backtesting software so you can come in and kind of choose your strategy and see if it actually works before you put your hard-earned money at risk,” Du Plessis said.

A third section of the website that includes a “full-fledged” automated trading platform is in the works, he said.

The final section will allow for safe and transparent communication, and members will be able to follow other traders on the platform, Du Plessis said.

“The best part about trading is the interconnectivity among traders. And so, the new platform has a full-blown, following profile — you’ll be able to journal trades, analyze your performance [and] post your own updates.”

Option Alpha will be a major player in options trading, in Du Plessis’ view.

The platform will launch its auto-trading platform in the near future, he said, adding that will it be a disruptor.

Option Alpha recently partnered with TD Ameritrade in a move that will allow traders, via an API connection, to make trades through its platform.

“You’ll be able to make auto trades where you can set up a strategy to just run on a constant basis based on triggers and entries,” Du Plessis said.

Option Alpha plans to partner with additional brokers, he said.

What Are People Saying?

Benzinga inquired about the success of Option Alpha users.

The platform does not have any data to quantify its users’ success, Du Plessis said.

“Empirically we can’t say that X amount of people made X amount of dollars, but that’s the reason why we are building out some of these software tools, so that we can not only help people see what they are doing, but also say hey, you know, 90% of people that use this strategy, whether it is ours or somebody else’s, do well.”

“That is not crowdsourced decision making, [where] everyone thinks this stock is going to go up and therefore I should buy it,” he said.

The team at Option Alpha is pushing for mass adoption of data-driven strategies, Du Plessis said: of users can identify that a certain strategy is expected to work well over a certain period, such as five years, then trading becomes more objective and powerful.

“The best way to make money from investors, in general, is to help them succeed, so that they actually grow their account and stay alive longer.”

Banks and brokerages “suck investors dry of their blood and then they just move on to the next body and corpse,” he said.

Québec Energy Board Releases Favorable Decision for the Blockchain Industry

Today's Pickup: Getting On The Same Page With Accounts Payable; The...

CONNVEX Laying The Foundation For The Connected Vehicle Solution