As July comes to a close, about 8.6 percent of carriers are still holding onto their automatic onboard recording devices (AOBRDs). However, the latest data indicates that regional and super-regional carriers are continuing to close the compliance gap between themselves and nationwide carriers.

The 8.6 percent figure is the three-week moving average of carriers that report they are still running AOBRDs during a weekly telephone survey conducted by CarrierLists, in conjunction with FreightWaves and EROAD. The survey exists to track compliance changes leading up to December 16, the deadline for all non-exempt carriers to switch their AOBRDs to electronic logging devices (ELDs). 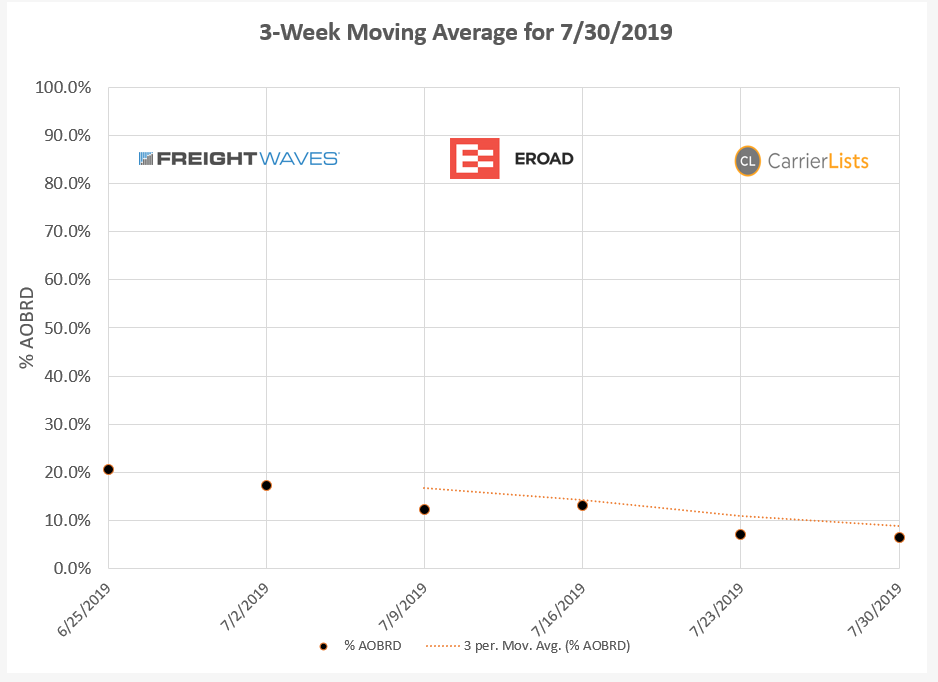 This week’s survey garnered responses from 156 carriers. Of those polled, 146 reported using ELDs and 10 reported using AOBRDs. When combined with results from the previous two weeks, this comes out to about 91.4 percent compliance.

This compliance rate is significantly higher than the rates reported during the first two weeks of the survey.

Throughout the course of the surveys, regional and super-regional carriers have consistently reported lower ELD compliance rates than their nationwide peers. While the trend continued this week, the gap has narrowed for two consecutive weeks.

Compliance rates by fleet size reflect the cumulative responses from all six surveys completed to date.

Of the carriers that are still running AOBRDs, the large majority still plan to make the switch during the fourth quarter. Almost 25 percent of carriers that are waiting to install ELDs are planning to put it off until December, pushing within two weeks of the official compliance deadline.

Only 10 percent of carriers surveyed are planning to make the change during the third quarter, with November coming in as the most popular month to start using ELDs. These numbers are consistent with last week, suggesting carriers have not changed their minds about putting it off. 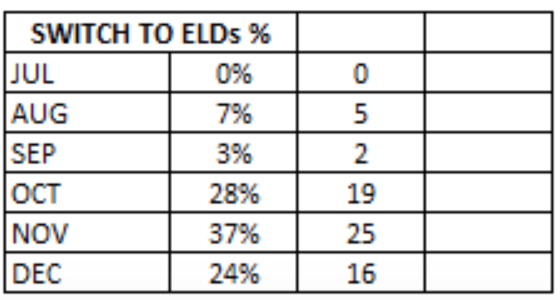 When compliance rate is broken down by fleet type, it becomes clear that some segments of the industry are more compliant than others. Tanker fleets, which previously showed low compliance numbers, have reported higher numbers over the last couple of weeks. Dry bulk carriers, however, seem to be lagging behind. 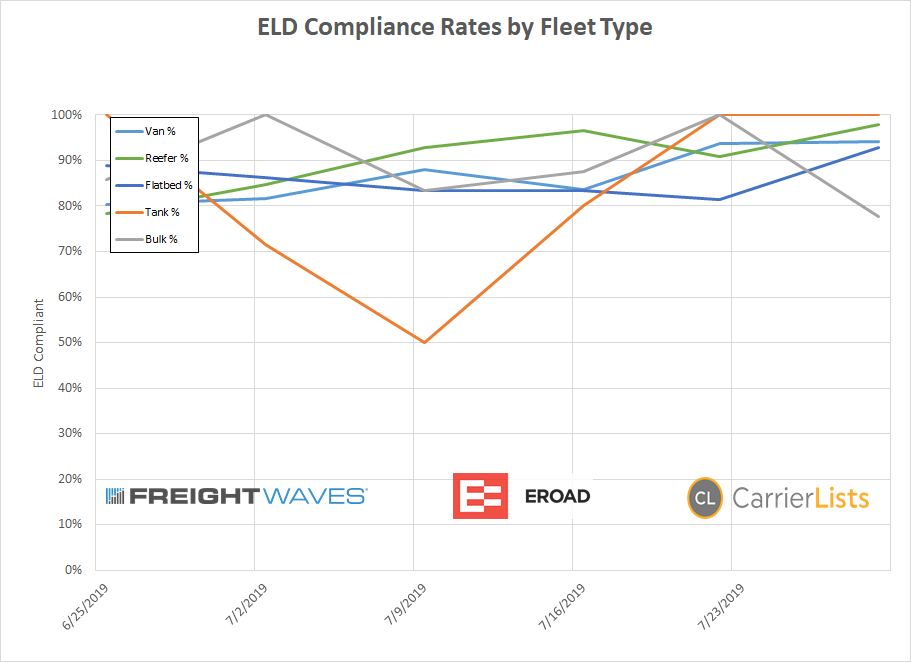 BulkLoads.com Operating Partner Jared Flinn noted that dry bulk carriers are different from the bulk of the industry because a large portion of the carriers run in radiuses under 150 air miles from their home bases and qualify for ELD exemptions.

While the FreightWaves survey eliminated exempt carriers from its data, EROAD Director of Regulatory Compliance Soona Lee noted that ELDs may provide some benefits for exempt carriers even though they do not need to worry about the December compliance deadline.

“Some regional carriers may be operating under the short haul exemption, which allows them to be exempt from ELDs,” Lee said. “However, we are finding that a portion of drivers are actually exceeding short haul criteria on a daily basis, and those fleets that have ELDs are keeping their drivers compliant. For this reason, many regional carriers are voluntarily deciding to deploy ELDs across their fleets for both compliance and commercial benefits such as greater visibility, driver safety and efficiency.”

Of the portion of dry bulk carriers that do not qualify for the short haul exemption, Flinn attributed their low compliance rate to a general distaste for technological advancement and the expectation of another extension.

“Most of them don’t like the advancements in technology. A lot of them have figured out ways to run older equipment and just not adapt to ELDs,” Flinn said. “I would think some of them think there is going to be another extension or something. We’re not hearing a lot of chatter about these guys getting on board with ELDs.”

Whether they like it or not, carriers that are not running under an ELD exemption will need to have the devices up and running by December 16 to avoid a fine on the highway.

Visit the AOBRD to ELD resource center to download the guide.