Atlas Air Worldwide Holdings Inc. (NASDAQ: AAWW) reported adjusted earnings per share (EPS) of $0.17 for the second quarter of 2019, missing analyst estimates by $0.54. Like other companies in the air cargo space, Atlas attributed its disappointing performance on tariffs and trade uncertainty.

The global outsourced aircraft provider reported adjusted net income of $4.5 million, down from $49.7 million this time last year. The company’s adjusted earnings before interest, taxes, depreciation and amortization (EBITDA) came in at $86.4 million, down from $125.5 in the second quarter of 2018.

Atlas reported total operating revenue of $663.9 million, down slightly but basically in line with the $666.1 million reported last year.

“Revenue and earnings in the second quarter were below our expectations, as air cargo volumes and yields were affected in the near-term by the widely reported impact of tariffs and trade tensions,” Atlas CEO William Flynn said. “In addition, our results during the period were impacted by labor-related service disruptions.”

Flynn attributed much of the softening on the commercial side to manufacturers’ and shippers’ wait-and-see attitude about tariffs.

The company’s aircraft, crew, maintenance and insurance (ACMI) segment was more active in the second quarter, indicating higher volumes. This was offset, however, by higher operational costs and softness in the charter segment.

“ACMI segment contribution decreased during the quarter as increased levels of flying were more than offset by higher crew costs, including enhanced wages and work rules resulting from our interim agreement with pilots at Southern Air; additional heavy maintenance expense; and increased amortization of deferred maintenance costs,” the company’s earnings report reads. “In addition, segment contribution was impacted by start-up costs for customer-growth initiatives as well as labor-related service disruptions.” 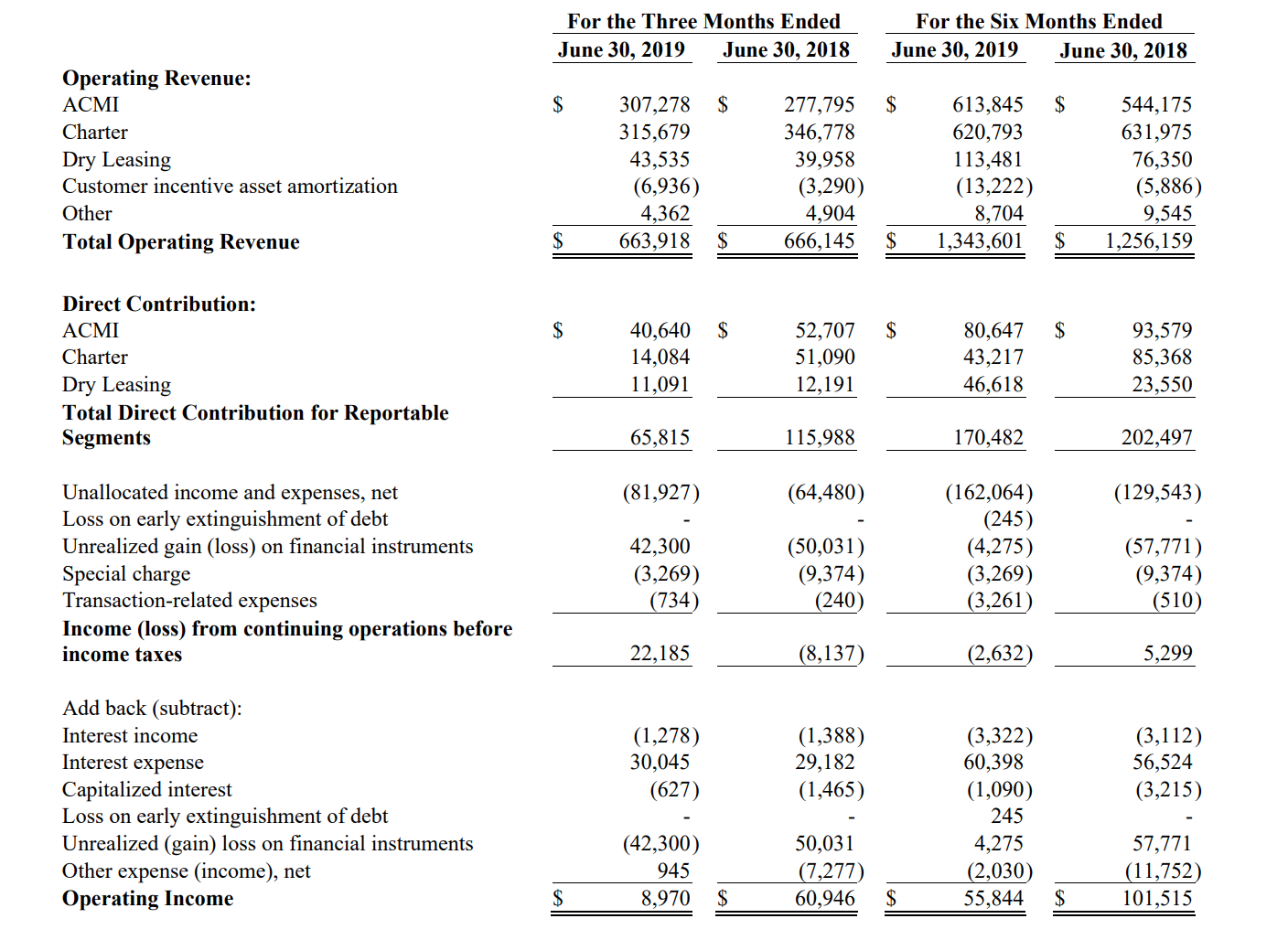 Flynn noted that trade tensions are near-term headwinds for the air cargo industry, and he said the company is well-equipped to weather the storm.

“Our actions include ongoing continuous improvement initiatives designed to increase productivity, enhance efficiency and grow the business,” Flynn said. “Additionally, we remain committed to negotiating a competitive collective bargaining agreement for our pilots. Our recent bargaining sessions have made progress, and we look forward to the upcoming scheduled sessions to continue that progress toward an agreement that all parties want.”

For the third quarter of 2019, Atlas expects to fly approximately 85,000 block hours (about 75 percent in ACMI), with revenue of more than $700 million and adjusted EBITDA of about $125 million. The company also expects third-quarter adjusted net income to represent a mid- to upper-teen percentage of full-year adjusted net income.

“Based on current conditions, we now anticipate that our full-year adjusted net income will total approximately 80 percent of our 2018 adjusted net income,” Flynn said. “Despite the present trade tensions and the resulting impacts on global airfreight, we have the right building blocks for the future, including our world-class employees; the modern, efficient, diversified aircraft and services that customers want; our focus on express, e-commerce and fast-growing markets; the scale and scope of our enterprise; and our leadership position in global aviation outsourcing.”

The company’s stock sank after the market opened Thursday, August 1. At 10:30 a.m., its price was down almost 16 percent.

Celadon's Closure An Opportunity For Other Companies In Turbulent Times

Path is clear for a year-end rally with key hurdles like the trade war...