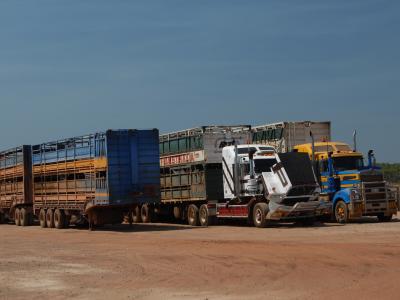 New tunnels on the M4 (an inner-city highway) will bypass 22 sets of traffic lights and will knock off 20 minutes from a trip to the outer city. The new tunnels are three lanes wide in each direction and are about 3.4 miles long.

It is hoped that the new tunnels will reduce traffic volumes on Parramatta Road, a main arterial suburban road, by 53 percent in a couple of years. The new tunnels are part of the WestConnex project.

“WestConnex will take up to 10,000 trucks a day off Parramatta Road, which is welcome news for anyone who sits in bumper to bumper traffic on that notoriously congested corridor,” state Minister for Roads Andrew Constance.

“Within two years it is expected that there will be about 67,000 trips a day through the tunnels, taking traffic off local streets,” Constance said. “The new M4 tunnels are the first of four major WestConnex tunnels. When WestConnex is finished in 2023, drivers will save an estimated 40 minutes on a trip from Parramatta to Sydney Airport.”

WestConnex is a major inner-city highway building project to relieve the extensive traffic congestion from the central area of the city to the far western residential areas.

It is highly controversial; many groups have attacked the state government and the project on the grounds of pollution, seizure (compulsory purchase) of private property, excessive secrecy and cost. According to some media reports, the cost has blown out from A$10 billion (US$6.9 billion) to A$45 billion (US$31 billion).

Tony Hickey, a 67-year old truck driver, remains missing after his truck exploded in a very remote area of Western Australia. Hickey was hauling a load of explosives to a licensed blast site for disposal. The explosives are typically used for rock blasting on mining sites.

For reasons as yet unknown, it appears from media reports that the load may have exploded.

Police arrived on the scene at 5:00 p.m. on Friday, July 26, only to find Hickey’s burning truck. A search of the surrounding area also failed to locate Hickey. A land search was instigated.

Forensics officers later attended the scene. A few days ago, on Wednesday, July 31, local police reported that human remains had been found on the truck that exploded.

The matter has now been sent for investigation by a coroner.

Thieves steal US$553,000 of trucks and excavators

Two trucks and three excavators, worth A$800 (US$553,000) were stolen from a construction site in the Australian state of Victoria.

Thieves cut locks sometime between 5:00 a.m. and 5:30 a.m. on Monday July 22. One of the trucks was found the following day. Police continue to investigate.

Following a truck rollover, police in New South Wales, Australia, carried out an inspection of 21 trucks and trailers operated by the owner, a waste removal company.

As a result of the inspection, 20 minor defects and one major defect notices were issued for brake issues, oil leaks, transmission leaks, steering leaks, damaged windscreens, and seatbelt and tyre issues. An infringement notice was also issued over a work diary breach.

A driver of a cattle-hauling road train in remote Australia had a lucky escape after his cattle-carrying trailer somehow caught fire. He told Northern Territory police that he saw a piece of rubber “fly from the right rear side” and then flames and smoke came from the left rear side.

The fire burnt through the truck’s air lines causing the road train to come to an immediate stop. By now, the first trailer, which was filled with cattle, was burning. A passing motorist and another trucker helped the road train driver release the cattle onto the road and tow the second and third trailers away from the burning vehicle. Two passing water tankers stopped and helped to put out the fire.

Both the prime mover and the first trailer were destroyed.

Truck driver blown off the road

A hay-hauling truck driver had a lucky escape and avoided serious injury after a strong gust of wind effectively blew his road train off the road, according to New South Wales police.

The truck/trailer in road train combination, hauling 79 metric tonnes of hay (one metric tonne is 2,204.6 U.S. pounds) was entering a corner at 90 km/h in an 85 km/h zone. A strong gust of wind hit the truck. The driver reported suddenly feeling the trailer lifting off the road, which forced the whole near side off the road and into soft ground.

The trucker tried to correct but, unfortunately over-corrected and he flipped the trailer. Members of the public and, later, the police and fire services attended.

Several car and truck drivers have had an extremely lucky escape after two truck and five cars smashed into each other in peak traffic on a local highway.

“It’s believed a B-Double truck travelling west on the Monash Freeway has hit a car and in the aftermath, five other vehicles, including another B-Double truck, have been struck about 7.30 a.m.,” Victoria Police said in a statement.

Paramedics took three people to hospital and a police investigation is underway.

Meanwhile, a few days earlier, a truck driver went on the run after the truck/trailer combo he was driving struck and killed a man. State of Victoria police say the truck was travelling east on the Westgate Highway when it hit a man about 11:30 p.m. The truck is thought to be a silver-white prime-mover that was towing a white reefer trailer.

Meanwhile, in the Clifton Hill area in the inner-city of Melbourne, chaos came to the city streets in the early morning of Sunday, July 28 when a truck pulled down 70 meters (230 feet) of overhead wires. The accident halted train services in the local area for just under five hours.

The company experienced a 249 percent growth in revenues to A$1.41 million from the year-on-year quarter. That revenue figure was also 30 percent up on the immediately preceding quarter (i.e. January to March). The company had cash on hand of A$68.9 million and no debt as at June 30, 2019.

The company has a software development center in Colorado, U.S.A. and a tech development facility in Europe. Earlier this year it also bought two U.S. based software platforms – Delivery Biz Pro and workforce scheduling provider, Scheduling+.

Controversy surrounds GetSwift. The company is being sued in a class action financed by litigation funders. There were originally three class actions against the company but only one now remains. Meanwhile, the local securities regulator, ASIC, is also pursuing the company in court.

Start-up GetSwift was founded in 2015 and listed on the ASX in 2016. GetSwift made several highly important announcements in relation to agreements it (or related entities) had made with a variety of well-known companies such as the Commonwealth Bank of Australia (one of the Big Four Australian banks); Pizza Pan; Amazon; Yum Restaurant and others. In mid-December 2017, the company announced a A$75m capital raising.

But then, in January 2018, local newspapers alleged that GetSwift had failed to inform the market that agreements with some customers had been terminated. Local media also alleged that, in at least one case, revenue forecasts had been prematurely announced. On January 22, 2018, its shares were placed in a trading halt and were shortly thereafter suspended from the ASX. The company was reinstated to the ASX on Monday, February 19, 2018.

At about the same time, three separate firms of solicitors (attorneys) began investigations into a possible class action and they attracted financing from litigation financiers.

Three overlapping class actions with substantially the same causes of action were launched in Australia. In an extremely lengthy and complex decision – far too long and complex to meaningfully discuss here – a judge of the Federal Court stayed two of the actions and allowed one to proceed. It is still in progress today.

Meanwhile, the ASIC lawsuit continues against the company. It is seeking declarations that several of the company’s announcements as a listed entity were misleading and that the company failed to notify the Australian Stock Exchange about material information.

ASIC also alleges that current (as at the time of writing) directors Bane Hunter and Joe Macdonald, along with former director, Brett Eagle, were involved in the failure of GetSwift to meet its obligations and failed to execute their duties to GetSwift with the required degree of care and diligence.

ASIC is seeking court orders that GetSwift, Eagle, Hunter and Macdonald pay monetary penalties and that the three men be prohibited from managing a corporation “for such period as the court thinks fit.”

In a statement, GetSwift said: “The Company irrefutably disputes the allegations made in both… the class action and the ASIC proceeding, including any alleged loss, and is and will be vigorously defending the proceedings.”

The class action lawsuit and the regulatory action both continue.

Wednesday's Market Minute: What To Watch For Today

Explained: How And Why Brexit Will Reshape Europe's Logistics Landscape