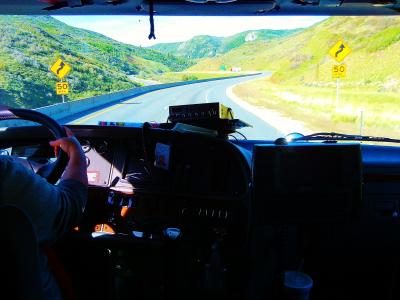 A 26 year old trucker and a 64 year old truck driver died in a head on crash on a major Australian road, the Sturt Highway, in South Australia earlier this week. The 25 year-old was identified as Coen Babaniotis and the other as Brendan Giles, a grandfather preparing to retire next year.

Emergency services rushed to the scene just after 11:30 on Thursday August 8 to discover two high-productivity trucks in B-Double configuration had smashed head on.

Both vehicles were on fire.

Weather conditions at the time were reported to be “horrendous” according to eyewitnesses. High winds were scouring that part of Australia at the time. There was also extremely low visibility owing to very high dust levels being whipped up by the strong winds.

“A dust storm does not cause vehicles to crash. It’s the decisions of the drivers. Airlines don’t let pilots take-off when they can’t see. If airports are fogged in, or weather conditions prevent safe flying, planes don’t take off,” Commissioner Stevens said.

“What makes us think we can continue to drive on our roads if visibility is down to zero?” he was reported as saying by the national broadcaster, the Australian Broadcasting Corporation.

Trucking operator hit with A$17,000 fine

Heavy truck operator Masters Holdings has been hit with a $17,000 fine, and legal costs, after being issued with 50 defect notices in a single year.

The company had earlier, in September 2018, been ordered to present its fleet for an inspection before the local regulator, Roads and Maritime Services. All of the 16 inspected trucks were defective with two major defects found in respect of a faulty speed limiter. There was also a “significant” brake issue.

Charges were brought against the company and its director, who pleaded guilty to 11 offences under the Heavy Vehicle National Law.

“The seriousness of the offences, particularly the speed limiter offences, the poor record of the company and lack of effort to ensure serious breaches didn’t reoccur led to Roads and Maritime requesting the judge [to] consider the maximum penalty,” Mr Weeks said.

“Where it’s clear a company doesn’t have a proper maintenance system in place, demonstrated by a number of vehicles in a fleet failing safety and maintenance checks, Roads and Maritime pursues the operator to ensure fleet compliance. It is pleasing the company now appears to have got the message, providing a detailed affidavit to the court addressing what it had done to ensure issues would not occur again. It’s unacceptable that trucking companies can risk the lives of other road users by not keeping trucks safe and roadworthy every time they hit the road,” Mr Weeks said.

Sparking up: uptake of electric vehicles

Australia will hit an inflection point for the purchase of electric vehicles, maybe at some point this year, according to modelling by the government’s Bureau of Infrastructure, Transport and Regional Economics.

The BITRE notes that government revenues from various vehicle related taxes will begin to decline.

“These taxes are currently used to fund a substantial part of the cost of road construction and maintenance, funding which will have to be replaced. Also, existing tax exemptions from value-added taxes and other purchase taxes for electric vehicles will become increasingly expensive the faster they gain market share,” the report concludes.

What do we want? Tax! When do we want it? Now! Who should pay it? Someone else!

The Australian Trucking Association has called for the Australian federal government to impose taxes on electric vehicles.

Government transport analyst BITRE believes that Australia’s purchase rate of electric vehicles will significantly increase over the next decade or so. The ATA reckons electric vehicle buyers should pay more tax.

“Road users contribute to the cost of roads through fuel duty, and as it stands, electric vehicle owners do not pay for the roads they drive on,” ATA Chair Geoff Crouch said today.

“Although the fleet is small, the time to act on road user charging for electric vehicles is now. The report indicates the window for getting light vehicle road user charging right, while the electric fleet is small, is rapidly closing. As the number of electric vehicles increases, the tax burden for road use will continue to shift to regional and suburban families driving petrol vehicles, as well as trucks,” Mr Crouch said.

Advanced Braking Technology (ASX: ABV) has won an order for Failsafe brakes, which will be installed on trucks in an underground Chilean mine. The brakes will be retrofitted to the Isuzu NPS 4×4 model truck.

The value of the order is A$150,000 and also includes kits to be held in stock. The initial order will be supplemented by an ongoing supply of spares and consumables.

The company hopes that the initial order will lead to further demand. Discussions are also underway with potential customers for the use of Failsafe brakes across other truck and light duty vehicle applications.

Minecorp-Chile Director, Sebastián Dibarrart said “this order is the first of what is expected to be an ongoing supply requirement for ABT products into the Chilean mining vehicle market… further opportunities will be pursued for the entire suite of ABT products.”

ABT Failsafe brakes will be used at Rio Tinto mines in Mongolia and also at large construction sites in Australia, following recent orders. ABT is providing brake design services to companies in the Australian defence industry and also in the Australian waste management industry.

ABT’s Failsafe range of brakes have a single brake rotor and “unique” grooved brake pads sitting inside an oil-filled, sealed housing. They have low operating temperatures and, because they are fully sealed, it’s not possible for abrasive or corrosive materials to adversely affect them. The brakes have a spring-activated hydraulic release failsafe component and optional interlocks. The brake is automatically applied when the e-stop button is pressed, the engine key is turned off or a vehicle door is opened.

“This system ensures the vehicle cannot roll away unexpectedly,” the company says.

Transurban (ASX: TCL) has announced the completion of a $500 million institutional placement.

Monies raised will be used to fund the company’s purchase of the remaining 34.6 percent equity in the M5 West tolled-motorway for A$468 million and for general corporate purposes. Transurban already owns the rest of the motorway.

The placement was “strongly supported” by existing security holders and was oversubscribed at the price of A$14.70.

Transurban will issue 34 million new shares, which will rank equally with ordinary securities.

Analyst Sumeet Singh, Head of Research, IPOs & Placements of Aequitas Research publishes on the Smartkarma platform. He sounded a note of caution.

“The acquisition implies a valuation of A$1.3 billion for the entire asset. Adding on the A$0.6 billion bank debt for the asset would imply that it is being acquired at a valuation of 7.7 x EV/EBITDA. This doesn’t sound cheap considering the concession has only seven years remaining… The acquisition is for a familiar asset and hence, doesn’t post much risk. However, the stock is trading close to its lifetime highs and analysts have been turning more bearish. While we would still participate in the deal, it won’t be with an expectation of anything higher than low single-digit returns,” Singh said.

What The Market Is Saying About Trump's Impeachment

The Week Ahead In Cannabis: Harborside, Hexo, MJBizConNEXT

Fintech Block Chain Market Projected To Grow at A CAGR 76.2%...

Sharing Weed With Your Teen Son Or Daughter (Or Any Minor)...