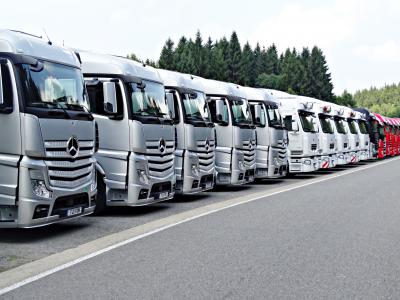 A prominent conservative politician in Germany wants to increase tolls on trucks and invest the proceeds in rail to fight climate change.

Andreas Jung, a member of Parliament who is in the Christian Democratic Union party, told the Frankfurter Allgemeine newspaper that the toll would apply to trucks 3.5 tons and above on all roads in the country. “The additional federal funds would flow into rail freight traffic,” he said.

Truck tolls already generate a large amount of money in Germany, but they largely support road infrastructure. After increases in 2018, the government projects to collect more than €7 billion per year (a euro equals $1.11).

Jung offered few details about his proposal. But it comes as Germany’s federal governing coalition prepares legislation to meet its 2030 climate change targets.

It seems likely that any legislation will have a significant impact on transport, a sector that Chancellor Angela Merkell has called a “problem child.”

Texas state, county and city governments approved almost $36 million to get Uber to open an office in Dallas.

“A group of pirates boarded the vessel and abducted eight of our 12 crew members from the vessel.”

– German shipping company MC-Schiffahrt on the abduction of crewmembers from its vessel MarMalaita anchored off Douala, Cameroon.

Silicon Valley’s PlusAI is poised to raise an additional $200 million, with a valuation over $1 billion, to boost the development of its autonomous trucks. (Bloomberg)

DHL reached a multi-year agreement with Komatsu to import spare parts for its mining operations in Australia and New Zealand. (Air Cargo News)

A trucker testified in a wrongful death suit that he was swerving to avoid a dog in the road when he collided with an SUV on an Alabama highway, killing five. An expert, however, blamed the crash on sleep deprivation. (WLTZ TV)

NASA is seeking proposals from private firms to supply the station that would serve as an outpost for its return to the moon. (Space)

Despite overall declines in other industries, Germany’s transportation sector generated more emissions in 2017 than it did in 1990, according to data from the Federal Environment Agency.

With that in mind, it’s understandable that politicians are looking for ways to reign in the environmental impact of trucking.

But collecting money from trucking to support rail as Jung suggested seems problematic considering that a train can’t capable of the same level of precision in deliveries.

Redirecting that money to support zero or low emissions trucks sounds like a more practical approach – and one that rewards the industry for improving itself.

7 Ways To Hedge Or Profit During The Next Recession