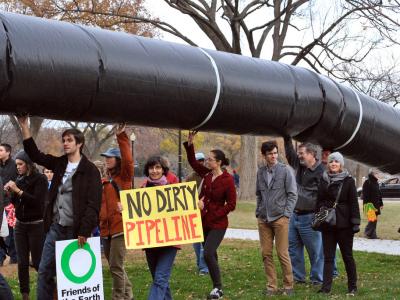 The Nebraska Supreme Court has affirmed a decision to build the Keystone XL Pipeline through the state in what could prove a boon for trucking and a loss for rail if the project eventually gets off the ground.

Several groups, including landowners, Indian tribes and the Sierra Club, had opposed a November 2017 decision by the Nebraska Public Service Commission (PSC) finding that the mainline route for the pipeline was in the public interest. The Sierra Club appealed the decision, but the high court agreed with the state.

“Each of these arguments [by the Sierra Club] raises issues of public concern and represents profound, deeply held beliefs,” the court stated, including whether the PSC had jurisdiction to consider the pipeline’s application, whether it properly considered the route and whether those opposing the PSC decision were given due process. “We answer each of these questions in the affirmative.”

Russ Girling, president and CEO of the project’s developer, TC Pipelines LP (NYSE: TRP), called the decision “another important step as we advance towards building this vital energy infrastructure project.”

However, the Sierra Club pointed out that the pipeline remains stalled due to legal challenges that have caused the company, formerly known as TransCanada, to miss its 2019 construction season, and that it also hasn’t yet formally announced if it will move forward with the project should it receive all necessary permits.

“Today’s ruling does nothing to change the fact that Keystone XL faces overwhelming public opposition and ongoing legal challenges and simply never will be built,” said Nebraska Sierra Club attorney Ken Winston in a statement. “The fight to stop this pipeline is far from over.”

Keystone XL is a 36-inch diameter crude oil pipeline that would extend roughly 1,200 miles from the tar sands region of Alberta, Canada to Steele City, Nebraska, where it would link to an existing pipeline system that connects to Gulf of Mexico oil refineries, with capacity to deliver up to 830,000 barrels of crude oil per day.

The company has asserted the project would support “tens of thousands of jobs” during the project’s two-year construction phase, including in the trucking sector, a reason the International Brotherhood of Teamsters has supported the project.

But ocean and rail transport could see longer-term negative effects if the project is approved. TC Energy also claims that if approved, the project would offset as many as 200 crude oil tankers per year while competing as an alternative to moving crude by rail. Based on recent market signals, that competition is already heating up as new pipeline capacity comes on-line and the announcement of new plans add more.

EUR/USD: Trump And Draghi Are Close To Surrendering

US To End Designation Of China As Currency Manipulator, Reports Say

The Price Of Diesel Is Way Down Everywhere Except The Pump

Old Dominion Report Sees An LTL Market That Is Slowing

A Peek Into The Markets: US Stock Futures Gain; Jobs Report...

Louis Vuitton Wants To Buy Tiffany For $14.5B, Could Be Rejected