Home Markets Live Feed EUR/USD Forecast: How Low Can It Go? Big Levels To Watch And...

Dropping below 1.1000 has proved detrimental for EUR/USD – which extends its downfall and fails at every recovery attempt. Some thought that the breach of the round number late on Friday was only an end-of-month event – but they were proved wrong. The world’s most popular currency pair hit 1.0930 – the lowest since May 2017.

The fall may be partially attributed to the political drama in the UK – where high uncertainty about Brexit has sent the pound plunging. The US dollar has gained some ground against other currencies as well.
Yet the main downward driver is the fear of a recession in the EU – and especially in Germany – continue weighing on the common currency. Members of the European Central Bank have expressed contradicting positions on the level of stimulus that they will present next week – but new measures are certain.

The US ISM Manufacturing Purchasing Managers’ Index for August is set to remain just above 50 – reflecting modest growth. With growing concerns about the US-Sino trade wars, a drop below that level cannot be ruled out – thus adding to US recession concerns. In that case, the greenback has room to the downside as odds for a rate cut will rise. The Federal Reserve meets on September 17th.

See US Manufacturing Purchasing Managers’ Index Preview: Revival is near

Another downward driver may be the US-Sino trade wars. As Americans return from their Labor Day holiday, headlines related to the spat between the world’s largest economies may weigh on the dollar.

After both countries slapped new tariffs on each other over the weekend, President Donald Trump said that talks scheduled for September in Washington will go ahead. However, recent reports have suggested that they have so far failed to find a proper time. If these high-level negotiations are canceled, investors may rush to the safety of bonds – further speculating on a Fed cut and weighing on the greenback.

Jerome Powell, Chair of the Federal Reserve, will speak on Friday but is unable to settle trade wars nor safeguard the economy against a recession.

See Powell powerless against Trump’s trade wars – US braces for a recession, USD set to move 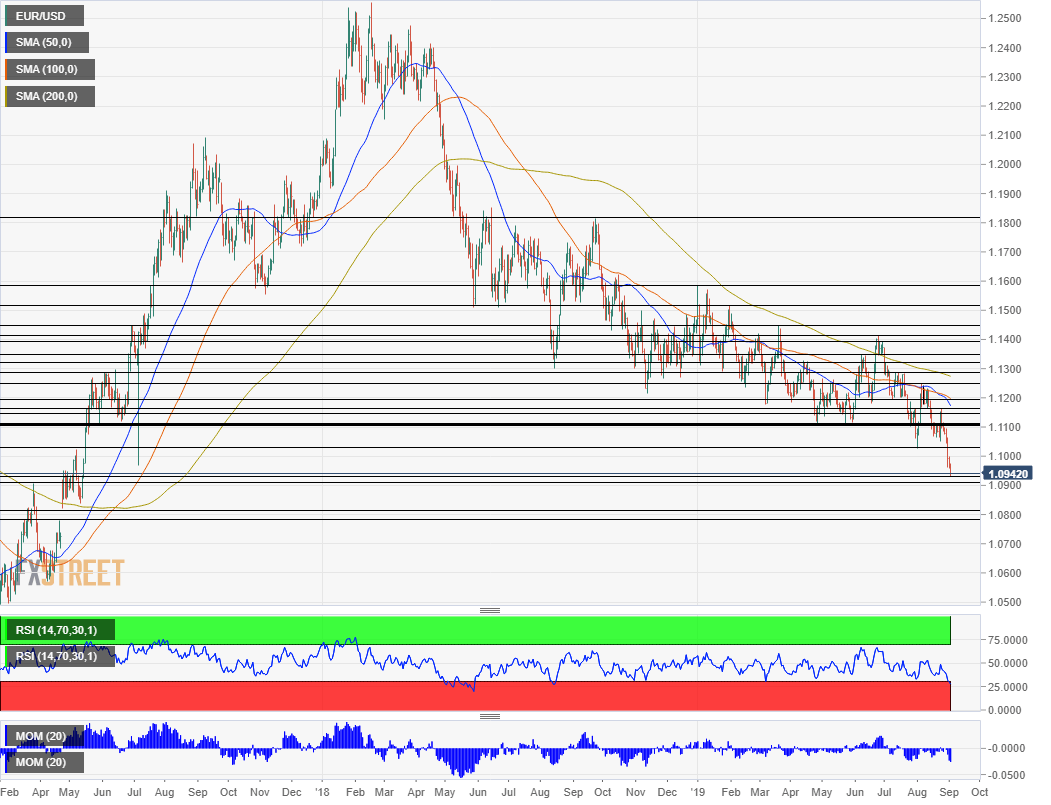 The four-hour chart has long shown oversold conditions – the Relative Strength Index falling below 30. And now, also the daily chart – useful for viewing the next levels – is below 30.