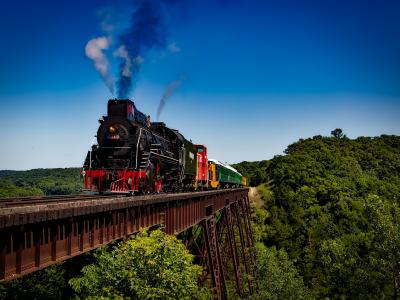 The head of CSX (NYSE: CSX) said his company needs to change the way it does business so that CSX can compete with trucks and be a reliable option in the future where e-commerce is booming and coal is declining.

“The days of going to the customer and saying, ‘what have you got for me today’ are done. We need to be proactive so that we don’t lose trucking share. We need to understand the whole supply chain,” said CSX CEO Jim Foote at an investment conference hosted by Morgan Stanley on Sept. 11.

Defining peak season has gotten complex because there are two different economies at work, the industrial economy and the e-commerce economy, Foote said. As e-commerce continues to grow, it’s led to a rise in non-traditional shipping patterns, which tend to function on a schedule that runs seven days a week and 365 days a year.

“We’re never going to compete with ‘Dial-a-Truck,’ and so that’s why we have to have the best service and be as efficient as we can,” Foote said. CSX needs to “understand the market” because that’s how CSX can fit into the logistics chain and add value to customers, he said.

“You miss a sort and you’re screwed. You need to be inside the minds of those people…We need to understand what these customers want and need,” Foote said when asked about how CSX can be part of a logistics chain that puts speed of delivery at a premium.

CSX’s transition to precision scheduled railroading (PSR), an operating model that seeks to streamline operations and schedules, can help the company respond to evolving shipping patterns because PSR enables CSX to be more nimble and carry around less “dead weight,” Foote said.

“We’re changing our business model and looking at the way we run our business, re-engineering our business processes, taking out inefficient steps to drive out unnecessary costs, and streamlining and improving quality of product,” Foote said.

“We need to get to deal speed,” Foote continued, alluding to the fast pace at which Uber secured an office in Chicago.

CSX’s evolving mindset to how it views the marketplace can be seen through its transaction of selling a 220-mile rail line in New York to Canadian National (NYSE: CNI), Foote said. CSX sold that stretch of track to CNI instead of to a shortline so that both companies could have a more direct connection to Toronto, he said.

The outlook for the remainder of 2019

If volumes remain weak for the remainder of the year, CSX can cut costs by reducing train sizes and consolidating trains. CSX is less inclined to reduce headcount because doing so has the potential to affect customer service and safety, Foote said.

“The problem with the current environment is the slow-drip nature of it…It’s much easier to respond to a bigger downturn than a slower decline,” Foote said.

Low natural gas prices in both the U.S. and Europe have curtailed domestic and export coal volumes, although earlier in the year, U.S. coal for industrial use got a bump from increased U.S. steel production as a result of U.S. tariffs, Foote said.

Uncertainty over how much the tariffs and the goods already in storage are impacting intermodal volumes is also making it hard to determine where the intermodal market is going, Foote said. But CSX is shielded from market uncertainty somewhat for domestic intermodal because much of its business is locked up in long-term contracts with channel partners, he said.

“It’s difficult to get a line of sight in terms of what’s going on,” Foote said.

Meanwhile, CSX’s merchandise business has softened as its customers in commodities such as lumber, paper, steel, plastics, chemicals and autos are taking a more cautious approach toward business.

“We’re not going off a cliff and no one is cutting back on long-term capital projects, but everybody has been cautious,” Foote said.