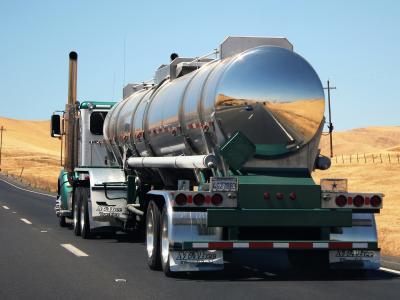 A cattle truck driver has been found guilty of causing the deaths of two other road users by dangerous driving, according to the national broadcaster, the Australian Broadcasting Corporation.

Mark and Lara Dawson were killed in the crash. They are survived by their two teenage children who were in the back of the LandCruiser.

A jury found De Pledge guilty of two counts of dangerous driving causing death. Sentencing for his crime is due to take place at the end of October.

Telematics agency Transport Certification Australia has announced that BlackBox Control is the first certified service provider of the agency’s Hill Descent Monitoring system. BlackBox Control is a company that enables its customers to monitor and control their mobile and fixed assets though tracking systems.

As previously reported in FreightWaves, driving down a long, steep hill can be quite hazardous for heavy freight vehicles. Truckers are required by Australian law to drive in a gear that is low enough to limit the speed of the vehicle without using the main brake. Failure to do so is a criminal offence.

The Hill Descent Monitoring Application will monitor the speed of descent on a given route and it can also detect whether a driver has performed the appropriate safety checks before the descent.

A trial of the system will get underway on certain specified hills on Western Australian roads.

According to BlackBox Control, the trial will require trucks to have systems fitted that can support the Hill Descent Monitoring equipment including forward- and rear-facing cameras. BlackBox Control is currently the only entity able to provide the requisite monitoring hardware and software. The company says it is seeking expressions of interests from certain types road train operators to help test the new technology.

“Transport operators that we have spoken to have determined that the cost of each two-way journey to retrieve additional trailers is around $1200 per journey, either in lost time or rates to employ a contractor to assist. We believe there is potential for operators participating in the HDM trial to recoup their investment in the HDM application in as little as 2-3 journeys, as they will be exempt from some of the current restrictions to help the technology be thoroughly tested,” says Mark Langford BlackBox Control General Manager.

The driver of a B-Double (a prime mover and two attached trailers) truck combination has reportedly been fired after he was caught on video veering from one side of the road to the other around blind bends in a hilly area.

At one point the rig nearly side-swipes an oncoming car.

“You’re just waiting for something to come the other way and waiting for an impact. There’s a couple coming the other way that he nearly took out and I don’t know if they realise how lucky they were,” local driver “Mark”, who captured the dangerous driving on his phone, told local TV channel, 9 News.

“This type of behaviour on that type of road is completely unacceptable,” said NSW Police Assistant Commissioner Michael Corboy.

A man who allegedly stole a tow truck and then fled from police for an hour across the southern city of Melbourne was shot, arrested and taken to hospital.

Police will allege that a stolen tow truck was seen driving through red lights and driving erratically on Monday, September 30 at about 16:00. Police gave chase until about 17:00 when the tow truck crashed into a tree.

Victorian Police moved in to catch the man who was shot during the arrest. The male driver was treated at the scene and was then sent to hospital in a “serious condition”.

An investigation is underway.

A group of local logistics representatives have called upon the state government of New South Wales to reinstate access ramps for heavy vehicles to the multi-modal transport project, the Sydney Gateway.

“This high capacity motorway network is vital for supporting the growth of our communities, places and economy. Sydney Gateway will greatly improve the way people and freight travel to Sydney Airport and Port Botany,” the NSW State Government says.

Australian Logistics Council CEO Kirk Conningham points out that when the Gateway was first proposed by the official state transport agency Roads and Maritime Services (RMS), the plan was to link to the Cooks River Intermodal Terminal – said to be Australia’s largest empty container part and a “significant” rail intermodal hub directly to the Gateway.

“This was a sensible approach, given that ramps at Canal Road would remove at least 1,600 truck movements a day from local roads. This would improve road safety, reduce congestion and enhance community amenity around [the local suburb], where the residential population has grown exponentially over recent years due to high-density apartment developments. However, RMS subsequently decided to remove these ramps from the Gateway design, citing cost concerns. We believe this is short-sighted and significantly diminishes the potential freight benefits of the Gateway project by contributing to gridlock on local roads in attempting to service NSW’s key international container port. At the same time, it will isolate Australia’s largest empty container park from this new major port road artery, and will condemn local Mascot residents to ongoing truck noise, safety and emission issues,” Conningham said in a statement.

He urged the state government to ensure that heavy vehicle access ramps are reinstated to the design before building work begins.

A Peek Into The Markets: US Stock Futures Edge Lower; All Eyes On Fed...

If the Fed opts for negative rates, it will need to be a 'Hail...

How a 20-year-old convinced Facebook's former security chief to invest in...