Home Markets Live Feed Rally Hats On To Start The Day As Hopes Build For Progress...

Like a playoff baseball game with lots of twists and turns, we’ll probably have to go inning-by-inning as news trickles out today on trade talks. Whether the last at-bat is a strikeout or a solid base hit (a home run seems unlikely) could help determine whether this early rally in stock futures is justified.

It seems like a long time since Monday’s selloff when trade hopes dimmed. Now the base coach appears to be waving runners on as expectations climb for some sort of progress. Stocks are on track for their third-straight day of rallying.

All this backs up what we said here on Monday about the chance of something positive coming out of this week even if a full deal seems unlikely. Back then, we discussed how it doesn’t seem prudent to get too optimistic or pessimistic, because a lot can still happen and it’s unlikely this week’s negotiations will be the ultimate word.

If the two countries can agree on some minor steps, like a possible delay in the U.S. tariff increase set for Oct. 15 (some news outlets say that’s a possible outcome), maybe that would put the market in a better mood and perhaps help lower volatility levels. On the other hand, if things go south today—always a possibility—sentiment could head down faster than the Chicago Cubs’ 2019 playoff hopes.

Positive comments yesterday from President Trump and confirmation he’d meet today with China’s vice premier are two reasons for optimism. What’s really interesting is that for apparently the first time, there are signs China might agree to some things beyond buying more U.S. products.

China’s securities regulator announced on Friday a timetable for scrapping foreign ownership limits in futures, securities and mutual fund companies, Reuters reported. That looks like a real example of solid progress in the talks. If anything gets announced today, it’s going to be important for that to be included.

Several Fed speakers are on the prowl today, so that’s another thing to keep an eye on other than trade talks. Also, Michigan sentiment is due later this morning (see more below). Earnings season starts next week with six major banks set to report.

The mood definitely improved Thursday, especially in trade-sensitive sectors like Materials, Industrials, and Technology, but with a sense that many people are holding back. There’s plenty of muscle memory about how often markets climbed on positive trade tidings only to fall again on the next negative tweet. That could help explain why despite the rally over the last two days, the S&P 500 Index (SPX) didn’t really push too hard toward recent highs. It finished yesterday just on the green side of its 50-day moving average—now near 2935.

To see where sentiment really improved, it’s arguably better to look at the bond market. After falling to near three-year lows down around 1.5% earlier this week, the 10-year yield has stormed back to 1.71% by early today. That’s below recent highs of around 1.9%, but enough to have some analysts talking about a potential double-bottom for yields. A “double-bottom” in technical terms can sometimes mean the lows are in, though there’s no guarantee. Also, a double-bottom hasn’t been established yet on the daily charts.

There definitely aren’t any guarantees as long as the bond market stays hyper-focused on trade. If the Chinese and Americans go back to their corners with no decision this week, or if economic data start to flag, those yields could turn lower again. It’s arguably way too soon to use the words “bottom” and “yields” in the same sentence. Still, the move this week looks constructive. Gold fell yesterday, too, perhaps on trade optimism.

One other possible reason bonds and gold got sold off yesterday could have been weekly jobless claims. A few weeks ago we pointed out that many analysts are giving the weekly claims number each Thursday a bit more attention than they used to, because this number could be a possible early sign of any softness in demand for workers. Claims of 210,000 came in below the average Wall Street estimate of 218,000.

Behind the Scenes: Key Technology Downgrade Worth Monitoring

One thing you might not want to lose in the shuffle as hopes build for some sort of temporary trade deal is a downgrade of Cisco Systems, Inc. (NASDAQ: CSCO) by Goldman Sachs Group Inc (NYSE: GS) yesterday. There’s no need to go over all the analyst’s specific points, which you can find in the online news coverage. What really stood out is that the analyst based his downgrade in part on the chance of deteriorating enterprise spending. If that’s actually the trend, it could be a big deal in coming months not just for CSCO, but for others in the sector, too, including semiconductor companies.

CSCO is seen as a barometer of the worldwide economy overall because it sells so many enterprise products that underpin the Technology industry, like switches, routers, and wireless. Yesterday’s GS note said spending on enterprise products has fallen recently.

It probably goes back to the tariff situation. In a world where things are undefined, companies often won’t spend on infrastructure. Even if the trade situation is settled by spring, that means two or three more quarterly earnings cycles where companies can’t discuss the infrastructure situation and risk getting further behind the eight-ball. If companies can’t plan, that hurts suppliers like CSCO.

All this puts more focus on CSCO’s earnings call—expected in mid-November. Not many companies have a better sense of the worldwide picture, so it might be interesting to hear what CSCO executives have to say about the economic slowdown in Europe and Asia, and to see their guidance. That’s probably a month away, though. In the meantime, semiconductor companies reporting later this month might give an earlier look at the state of the Technology sector.

In other sector and company news, shares of Bed, Bath & Beyond Inc (NASDAQ: BBBY) shot up more than 20% yesterday after the company announced a new CEO. That was quite the welcome. 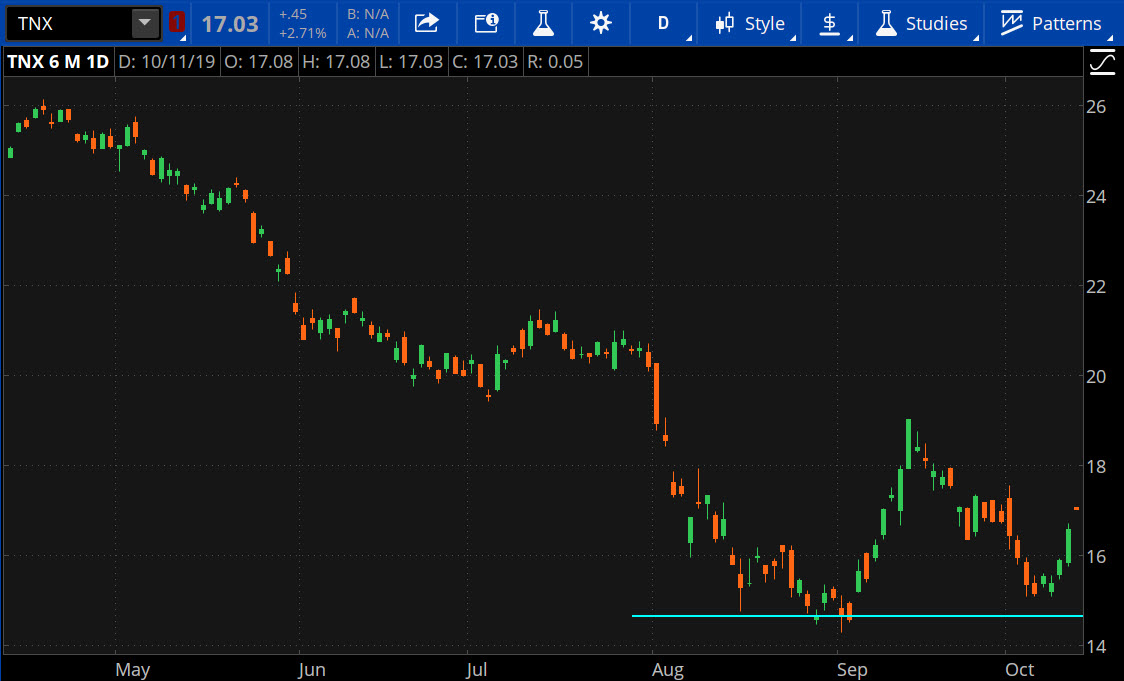 FIGURE 1: DOUBLING DOWN ON 10-YEAR? This six-month chart of the 10-year Treasury yield (TNX), has some market watchers suggesting the possibility of a “double bottom.” From a technical perspective, this week’s quick recovery from recent lows looks like it could signal a trend reversal, but remember some analysts earlier this year thought the 10-year yield made a double-bottom above 2%. That one didn’t hold and it looked more like the classic double bottom. Data Source: Cboe Global Markets. Chart source: The thinkorswim® platform from TD Ameritrade. For illustrative purposes only. Past performance does not guarantee future results.

Zero-Point-Zero: That’s the state of the Consumer Price Index (CPI) in September. Flat. Zero. The news was arguably even more negative earlier this week on the Producer Price Index (PPI) side, where the headline number actually fell 0.3% in September. On a positive note, core CPI did rise 2.4% year-over-year, which does presumably reflect at least some inflation in the economy.

While it might be nice to pay lower prices for gas and other items, flat or falling inflation doesn’t paint the most glowing picture, and it’s going to be interesting to see whether those weak inflation readings get reflected in today’s October consumer sentiment report from the University of Michigan. The report, due later this morning, could get a closer look than usual due in part not just to weak inflation, but also the soft manufacturing data last week, slowing jobs growth, and other signs of weakness like auto sales. The housing market has improved lately, so that’s one positive the report might pick up. Last time out, headline sentiment was 93.2, but analysts expect a drop to 89.9 for this one. It was 100 as recently as May.

Big Bank Bonanza Next Week: The focus on trade that’s had markets in an iron grip over the last week or two might finally get some competition when Tuesday arrives. That’s when earnings season informally begins, with Q3 results on the way from six of the most closely watched banks. Citigroup Inc (NYSE: C), JPMorgan Chase & Co (NYSE: JPM), Goldman Sachs, and Wells Fargo & Co (NYSE: WFC) all start things off Tuesday morning before the open, so expect a lot of headlines and maybe some confusion and volatility that morning as investors try to make sense of all the numbers. You might remember that during Q2 earnings season, Financial sector results helped renew investor confidence in the U.S. consumer. The question heading into Q3 is whether banking executives still see the same kind of strength, and if they think it can continue amid trade wars, Brexit, and signs of weakness in the U.S. economy.

If you’re keeping score at home, the emphasis with banks this time around might be less on the actual earnings results—which are expected to fall slightly from a year ago for the sector, according to FactSet—but on how the executives frame last quarter and the coming months. If you’re going to only have time to listen to a handful of earnings conference calls, maybe consider the Financial ones, because these executives have a 20,000-foot view of most aspects of business and consumer trends and moods.

Pump Down the Volume? We talked a bit yesterday about how confusing all these headlines on the trade talks can be. Well, it looks like some people are just giving up and staying on the sidelines. Market volume sank mid-week, and Briefing.com said this might reflect that “participants have no idea what side they should be on at the moment.” It’s not a bad idea, necessarily, to restrain from trading when the market is see-sawing this way. When the major indices are down 1% on one day and up 1% the next day all due to headline noise, it’s often a good idea to stop watching all the minute-by-minute clicks, stop checking your portfolio gains and losses, and remind yourself why you’ve invested in the first place.

October tends to be a volatile month, and this one is living up to its reputation. The Cboe Volatility Index flirted with 20 earlier this week from below 13 back in mid-summer. Despite all the back-and-forth, the S&P 500 Index (SPX) just hasn’t moved much. It’s up just 1.2% over the last year. So we’ve had a lot of noise and bumps on a trip that took us basically nowhere, despite what you might think if you were watching every tick.

Bulls And Bears Of The Week: Apple, Nike, Tesla, Uber And More

Your first trade for Tuesday, Nov. 19

Even In An ELD World, CVSA Roadcheck Results Show Focus On...

Stocks have gone too far, too fast and may need to...