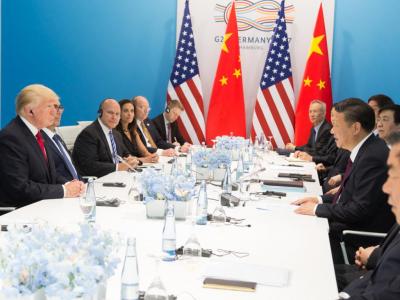 The partial agreement could signal a major easing, or even an imminent end, to a trade war between the two countries that has been widely blamed for hurting the global economy.

Trump said the two countries are “very close to ending” the trade war, which has been one of the dominant economic events in his presidency. Details of the deal, which Trump announced while speaking in the Oval Office alongside Chinese Vice Premier Liu He, haven’t been released.

The deal will avert a new round of tariffs on China, and includes an agreement by the Chinese to purchase up to $50 billion worth of agricultural items, the president said.

That provision could be a huge boon to Trump, who has typically garnered some of his strongest support from Americans in rural farming areas, but who have wavered in recent months in their backing of the president because of the economic impact of the trade war.

The announcement of a preliminary agreement also comes as the president begins what is expected to be a protracted battle over impeachment in a separate matter. House Democrats are investigating claims Trump tried to get Ukraine to investigate one of his potential 2020 opponents, former Vice President Joe Biden.

Trump said the China deal could take more than a month to be written.

As part of the trade war, the U.S. has put $360 billion worth of tariffs on Chinese products and was poised to put more on laptops, toys and furniture that China sells to the U.S. before the end of the year.

Trump also said the initial deal includes agreements on certain foreign exchange issues. The second phase of the deal will include agreements on technology transfers from American companies to Chinese counterparts as a condition of doing business there.

Seed CX Cuts Fees to Among the Lowest in the Industry Following Record Trading...

Co-Diagnostics Rallies On Plans To Develop Screening Test For Coronavirus