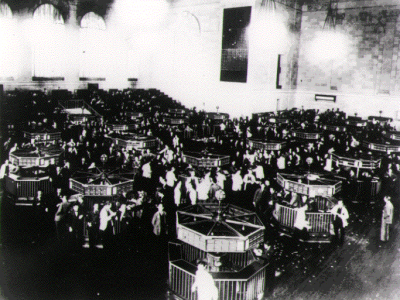 Each day, Benzinga takes a look back at a notable market-related moment that happened on this date.

On Oct. 29, 1929, the Dow crashed, catalyzing the start of the Great Depression among industrialized nations.

Where Was The Market

What Else Was Going On In The World

Germany continued to revolt against the Young Plan for settling its post-World War I debt, and Albert Fall, then former Interior Secretary, had just become the first U.S. Cabinet member to go to jail after being convicted of bribery.

Black Tuesday Casts A Pall On The Market

After days of turmoil, which saw the Dow drop 13% Monday and 11% the preceding Thursday, the market collapsed and triggered a wave of panic selling. Thousands of investors lost billions of dollars, and tickers fell hours behind as daily trading volume surged to 16.4 million shares. The volume remained a record for the next 40 years.

Stocks didn’t completely bottom until July of 1932, when the Dow closed at 41.22. By the next year, almost half of the nation’s banks had failed, and nearly 30% of the workforce suffered unemployment.

Ahead of the crash, stocks had surged nearly 10-fold throughout the post-war 1920s. The rapid expansion eventually stuttered with a confluence of poor circumstances: production and wages fell, unemployment surged, debt and bank loans proliferated, and agriculture stumbled.

This Day In Market History: Cornelius Vanderbilt Prevents A Stock Market Crash — For One Day

The trading floor of the New York Stock Exchange six months after the crash of 1929. Public domain.

Voi increases another $85M for its European e-scooter service