Home Markets Live Feed “Fight to Fame BMS” Debuts In China For The First Time At...

BEIJING, Nov. 28, 2019 /PRNewswire/ — On November 24, 2019 the 2019WBBU “Fight to Fame BMS” World Boxing Championship and the Beijing National Fitness Boxing League competition was held. They were co-sponsored by the Beijing Boxing Association and the WBBU World Boxing Friends League. In response to the voice of the Chinese nation, the 2019WBBU, advocated for fitness for all citizens in China to become the  standard for physical health. 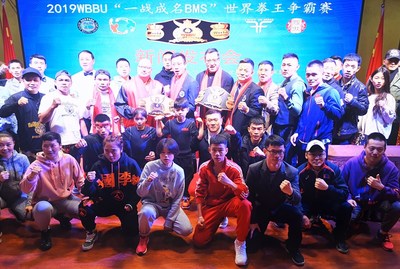 This was the grand opening of the People’s National Peptide Golden Hall in Chaoyang District, Beijing. Boxing members and enthusiasts from all walks of life gathered together to participate in an exciting event to help the nationwide fitness boom.

Professional and amateur competitions work together to help national fitness

This event was divided into a professional competition which was the 2019WBBU “Fight to Fame BMS” World Boxing Championship and amateur competitions from the Beijing National Fitness Boxing Ranking League. The goal was to innovate the Beijing Boxing Association to allow more boxing enthusiasts to participate and attract more attention to the sport.

The reason why “Fight to Fame BMS” was held in China for the first time at the World Championship Boxing Tournament jointly held with 2019WBBU is to make full use of the resources and platform of Fight to Fame. They want to provide more world champions and global athletes an understanding of China’s sporting spirit, sports events, and develop its international competitiveness.

At the same time, WBBU wants to use Fight to Fame BMS’s global platform as the first window of communication between China and global athletes. This will give many athletes and fighters the opportunity to go abroad on the world stage and show their strength.

There were a total of five professional competitions at the tournament. The event had 40 boxing clubs from China participate making it a highly popular event for Beijing. After a tough selection process, 12 clubs eventually were chosen to join the amateur competition. Participating club organizers provided 30 locations to watch the event, and more than 300 boxing club fans watched live.

At the same time, the Beijing Boxing Association also developed a performance competition called “Competitor League”, which is mainly for the purpose of national fitness. This will help educate people on the sport to promote boxing, help national fitness, and make national fitness activities more exciting.

There were many highlights during the five professional competitions. Of the competitors included Chen Mingcun, who just won the WBBU Intercontinental Championship in the Philippines. Thai boxing champion CHAIYA, competed for 12 world class rounds during the event. Huo Ziqiang, a native boxer from Beijing Shichahai Sports School, also competed during the event. He fought with VACHAYAN from Thailand for 10 rounds of intercontinental boxing.

The amateur competitions also had great praise from the fans. The competitors came from the selected clubs and included movie stars, workers, teachers, students, influencers, and more. The youngest was 13 years old and the oldest was 38 years old. They all trained hard for the competition and brought a new level of excitement to the event.

Before the fights, 15-second air strikes and 15-second hand target test scores were performed. If there was a tie in the competition, the performance points determined the winner.

This event was reported on CCTV, Beijing TV Sports Channel, China Sports News, Xinhua News Agency, and more. At the same time, it was broadcasted live on the Watermelon Video. This event has surely created more attention for boxing and the advances in the sport.

EUR/USD Forecast: Could Extend Its Decline To 1.1065