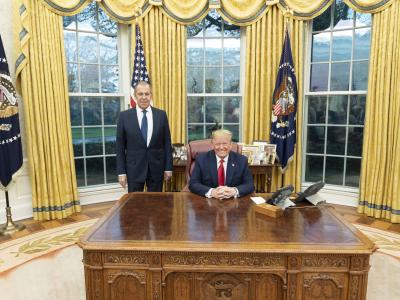 President Donald Trump held a meeting with the Russian Federation’s foreign minister Sergey Lavrov in the oval office on Tuesday, even as Democrats introduced the articles of impeachment against him in the House of Representatives over his dealings with Ukraine.

In a statement issued after the meeting, the White House said that many matters concerning the bilateral relationship between the two countries, including election interference, arms control, North Korea, China, Iran, and trade, were discussed.

The White House said that Trump warned Lavrov against “any Russian attempts to interfere in the [U.S.] elections.”

Trump made a similar statement on Twitter Inc (NYSE: TWTR), saying that Russia’s alleged “election meddling” was one of the topics discussed during their meeting.

Trump has previously suggested that Ukraine, not Russia, was responsible for interfering in the 2016 presidential elections.

Lavrov initially denied discussing anything on election interference with Trump, as reported by the Washington Post. He said the matter was only discussed with Secretary of State Mike Pompeo.

The minister later changed his statement to say that it was he who brought up Pompeo’s complaints related to the Russian meddling in the 2016 U.S. elections, and asked the president to release documents related to communications between the two countries in the concerned time period, WP mentioned.

Lavrov, who denied any Russian interference in the election, said after the meeting that the U.S. Congress is doing everything it can to destroy the relationship between the two countries, Russian publication RIA reported.

“The strategy started with the Obama administration, and it goes on,” Lavrov said, according to a Benzinga translation. “But we are used to these kind of attacks, and we know how to handle them.”

Lavrov also said that he had invited Trump to an official visit to Russia for Victory Day celebrations on May 9 next year, a major festival in Russia that commemorates the capitulation of Nazi Germany to the Soviet Union at the end of the second world war.

The Waterfall Theory Of Freight