Nike Inc (NYSE: NKE) reports later today after Micron Technology Inc (NASDAQ: MU) lit up the semiconductor world with its results last night (see more below). At the same time, the 10-year Treasury yield creeps closer and closer to 2%, which it hasn’t seen since July. It’s closing in on 1.95% this morning ahead of a Treasury auction of shorter-term products set for today.

As for the news from Washington, it doesn’t seem to be making a big splash beyond the Beltway. Not as far as the stock market is concerned, anyway. This isn’t a political column, but it’s important to watch for possible impact from big events like the one at the Capitol last night. Sentiment on the Street suggests that the market isn’t tuned in that much, at least not at this point.

Quadruple witching is tomorrow, but the market isn’t showing much excitement ahead of that. It seemed possible we could have one big day this week as witching loomed, but it’s been a snoozer so far. U.S. stocks had a slightly negative tone going into the opening bell, apparently following the lead of stocks around the world, which were mostly lower.

Jobless claims, which spiked to a two-year high last Thursday, fell by 18,000 in the most recent week, to 234,000. That’s still well above this year’s average, but some analysts say claims can be volatile in the period after Thanksgiving.

Earnings enter their final lap of the year this afternoon when NKE comes jogging down the track. Analysts see the footwear company chalking up earnings per share of 58 cents, up from 52 cents a year ago, on revenue of $10.09 billion. Shares of NKE galloped into earnings with a solid performance Wednesday and are up nearly 36% year-to-date, beating the S&P 500 Index (SPX) pretty easily.

Sales performance in China after last quarter’s big gains there might be one thing investors look at today, along with progress in NKE’s online business. Remember, NKE is a component in the Dow Jones Industrial Average ($DJI), so its results could have an outsized impact there.

Speaking of earnings, we saw a nice beat from semiconductor maker MU yesterday afternoon, and that could potentially help lift the entire sector today. A bunch of industry names rose in pre-market trading.

What’s encouraging is MU’s CEO saying the current quarter looks like it might be the “cyclical bottom” for MU’s financial performance. That’s pretty bullish when you see a company basically call a bottom.

MU beat analysts’ consensus for earnings and revenue in its fiscal Q1, but guidance for Q2 was a bit below Wall Street’s expectations. That didn’t seem to hurt shares too much, as they charged up 3% in post-market trading late Wednesday.

The stock was already on a roll before earnings, helped by some analysts saying they see signs of improvement in the slumping memory chip business. The removal of the Dec. 15 tariff threat, which was an unpleasant overhang for the industry the last few months, is also a plus and could be contributing to chip sector strength.

Tesla Inc (NASDAQ: TSLA) had a big day Wednesday, accelerating to 3.74% gains. Reports that TSLA might cut the price of its cars in China appeared to help the stock. When you think about the lower entry prices for the company’s cars, they’re clearly making the play that they want to be the car for everyone, not just the elite. Their focus has changed and the market seems to love it.

In one ironic development, shares of Bed, Bath and Beyond Inc (NASDAQ: BBBY) soared Wednesday after the company announced the departure of several major executives as it restructures.

The weekend approaches with a cascade of data today and tomorrow for everyone to ponder as things quiet down for the holiday. Existing home sales for November surface later this morning, followed Friday by the government’s last estimate for Q3 gross domestic product and the Personal Consumption Expenditure (PCE) inflation data for November.

Wall Street consensus is for a 0.2% monthly increase in the PCE price index, equal to November’s rise and probably not high enough to create any inflation anxiety. Remember, the Fed has said it actually wants a little more inflation, so it’s not like a higher number would necessarily get people worried about rate hikes. The year-over-year core PCE reading in October was 1.6%, so a little bit of a gain there might be seen as a sign of an improving economy and a positive signal for the market.

For GDP, consensus is 2.1%, a slight tick up from 2% last time, according to Briefing.com. Michigan sentiment for December also bows tomorrow morning. Tomorrow’s a big day on data street.

Will yields bring home a two percenter for Christmas? Chances looked a little better after Wednesday’s selling in the Treasury market that sent the 10-year yield to 1.92%. This week’s high points are the best showing for the 10-year yield since early November. That month, a test of the two-handle fell short, and yields got clipped all the way back down to 1.71% by early December.

Yesterday’s minor losses for the SPX ended a five-day winning streak, but the news wasn’t all negative for major indices. The Russell 2000 (RUT) small-cap index posted solid gains and is now up nearly 13% from its early October lows.

The SPX is up about 10% since then, meaning small-caps have outpaced the SPX. Sometimes strength in smaller stocks is seen as a barometer for improving economic health. The RUT has big weightings in financial and health care stocks, and a bit less of a weighting toward technology compared with the SPX. It’s often said that it’s hard to have a big rally if the banks don’t participate, so strength in the RUT is possibly a sign of bank stocks putting on some muscle. Financials have easily outpaced the SPX over the last month.

However, another economic barometer, Transports, had a bumpy flight on Wednesday, falling nearly 1%. Most of the airline stocks lost some altitude, maybe because of fall-out from Boeing Co’s (NYSE: BA) announcement earlier this week it would suspend 737-MAX production. This is a sector that could be volatile in coming weeks as the new year begins and we learn more about BA’s plans. The date to watch looks like it might be Jan. 22, which some analysts think could be BA’s next reporting date. We’ll have to clarify that as we get closer. 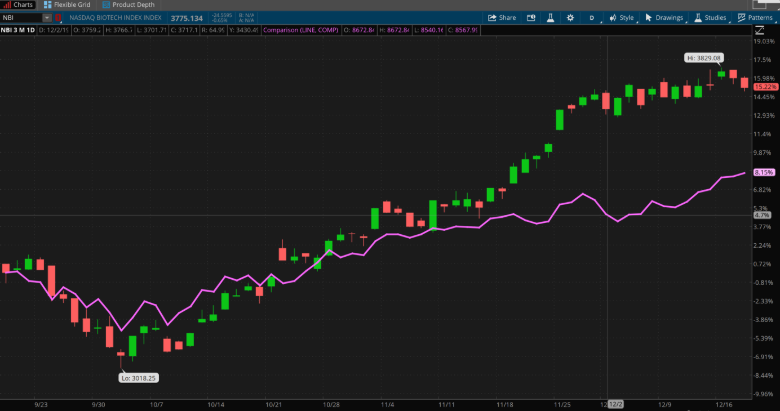 CHART OF THE DAY: BIOTECH BLAST BLUNTED: The Nasdaq Biotechnology Index (NBI-candlestick) has been roaring since early October, as this three-month chart shows. It’s easily outpaced the Nasdaq Composite (COMP-purple line) since then, but slowed down a bit this week, maybe in part because a North American trade bill doesn’t include a provision protecting biologic exclusivity for 10 years (see more below). Data Source: Nasdaq. Chart source: The thinkorswim® platform from TD Ameritrade. For illustrative purposes only. Past performance does not guarantee future results.

Breaking it Down: Going into 2020, it’s easy to find analysts who say valuations are high across the board, making it more difficult to choose a sector strategy. While it’s true that the SPX has a forward price-to-earnings value of about 19—well above historic averages—and that even so-called “defensive” sectors like Utilities and Consumer Staples have had double-digit gains this year, that doesn’t necessarily mean it’s impossible to find reasonable investments. It just means you might have to be more choosy and better understand how to dive deeper into a sector.

Take the semiconductor sub-sector of Technology, for instance. Some chip stocks have skyrocketed this year, with Advanced Micro Devices, Inc. (NASDAQ: AMD), for instance, up more than 100%. However, semiconductors can be broken down further, into companies that service the cloud infrastructure vs. companies that build chips for big manufacturing plants.

Doing the research here might help investors distinguish how the fundamentals differ between these two types of chip firms and get a better sense of which companies might be better positioned to grow their businesses further.

Best Year Since 1997? Options Point to a Chance: Prediction isn’t a game that’s always prudent to play, but the options market does place small odds on the possibility of this year being the best since 1997 for the SPX. It may not be a high probability, but it’s not out of the question. As of midday Wednesday, options activity showed the market was placing a 13% chance that the S&P 500 will end the year at 3,250, and a 23% chance that it would surpass that level sometime between now and the end of the year.

Bio Blues? The Nasdaq Biotechnology Index (NBI) has been on a tear since early October, climbing about 21% since then amid some meaningful merger and acquisition (M&A) activity in the space, along with positive investor sentiment that tends to help more aggressive sectors like this one. It’s still below the all-time peak it reached back in 2015, however. Whether it can test those levels again might be in question after details emerged of the new U.S. Mexico-Canada (USMCA) agreement.

The biotech industry lost a big battle when the House of Representatives struck out language that would have given 10-year patent protections for a classification of drugs known as “biologics.” These high-cost products are ones that companies like AbbVie Inc (NYSE: ABBV) and Amgen, Inc. (NASDAQ: AMGN) have made billions of dollars from over the last few decades, and treat everything from cancer to auto-immune diseases.

The loss of 10-year exclusivity, something the biotech companies had fought for, might open the way to more competition from “biosimilar” products that treat the same illnesses and have been developed both by traditional pharma and generic drug companies starting late in the last decade. Shares of AMGN and ABBV, along with another biotech firm, Gilead Sciences, Inc. (NASDAQ: GILD), flatlined or turned lower this week.

The Global ASIC Chip Market size is expected to reach $24.7...

Where top VCs tend to be purchasing real estate and proptech...