Home Markets Live Feed Getting Ready To Wrap Up: Holiday Week Begins With Stocks Near All-Time...

What a difference a year makes. At this time last year, markets were melting down, and of course a year later we’re cruising to new all-time highs.

This week could see a low volume, thinly traded market because of the holidays, so what does that mean for investors?

First, there may not be a ton of volatility, and markets might just drift into the new year. However, if there is any type of major news headline the lack of eyes on the market could lead to exaggerated moves on headlines.

Tuesday is a shortened session ahead of the holiday, with stock trading ending at 1 p.m. ET,  so it might be even quieter than today.

For the holiday week in particular, we’re not expecting much in the way of market-moving events, as there just aren’t really any earnings and economic data seem extremely light with the exception of durable goods and new home sales today. Markets have a somewhat stronger tone in the pre-opening hours Monday in part because China said it would lift tariffs on hundreds of U.S. products, according to media reports.

Reaction to the tariff news seemed a little muted ahead of the opening bell, maybe because much of the positive trade news is already baked into the market.

Two stocks under scrutiny this morning are Boeing Co (NYSE: BA) after its less than perfect Starliner mission over the weekend, and Disney Co (NYSE: DIS) as Star Wars fans head home from weekend viewings of “The Rise of Skywalker.” The movie brought in $176 million in the U.S. and Canada on its first three days in theaters, but DIS shares were slightly lower early Monday as apparently some analysts had expected an even more galactic amount.

It also brought in $198 million internationally, bringing its global box office total to $374 million for the opening weekend. “The Rise of Skywalker” will be the last Star Wars movie until 2022 as Disney puts the series on a “hiatus.”

Meanwhile, trading of BA was halted ahead of the opening bell for “news pending.” Media reports said its CEO, Dennis Muilenburg, has been replaced.

One interesting thing is that the markets have remained fairly polarized recently. Even as the stock markets are making new highs, we’re still seeing the gold and bond markets remain relatively elevated. This arguably shows that there are still a large number of skeptics who aren’t fully convinced that the economy is going to continue chugging along into 2020. It might be a good idea to monitor the relationship between the risk-off assets (bonds and gold) and the risk-on (stocks) going into the new year.

With the old year wrapping up, it’s a good time to consider where it’s been and what might be next. The market appears poised to post strong 2019 gains in many of the major asset classes. Stocks, bonds, and gold in particular have all performed very well this year.

Market action in 2019 was often linked to macro headlines, primarily related to trade and the Fed. Though there’s no way to know for certain, it looks like this coming year might end up being more fundamentally driven, at least before the election heats up. At least for now, it seems that the trade and the Fed have become less and less of a factor.

One question investors might want to ponder going into the new year is “How do I want to be positioned for 2020?” We know there are events on the calendar (like the election) that could lead to volatility, but we also know that a lot of the things that held us back in 2019 are starting to fade away. That could set  us up for another strong year if the economy remains strong and earnings start to show growth at more healthy levels again.

But with markets at all-time highs, it’s never a bad idea to consider rebalancing and taking winners off the table. This could especially be the case if your outlook has changed or isn’t as bright going into a new year, which— like all years—will bring its share of uncertainty and stories that make it unique.

FAANGs Back in Spotlight

Maybe the “FAANGs” got tired of being ignored. They’re closing the year with an exclamation point as both Netflix Inc (NASDAQ: NFLX) and Facebook, Inc. (NASDAQ: FB) roll up the gains this week and Apple Inc (NASDAQ: AAPL) trades near recent record highs. Alphabet Inc (NASDAQ: GOOG) has also done well on the charts in 2019. Only Amazon.com, Inc. (NASDAQ: AMZN) is missing the stock market end-of-the-year party.

NFLX, whose shares are up nearly 4,000% this decade according to MarketWatch, had its ups and downs this year as investors fretted about U.S. subscriber numbers and new streaming competition. However, some analysts say the real subscriber growth is overseas and there’s more opportunity out there for NFLX. Looking back, NFLX forecast global subscriber growth of 7.6 million for Q4. We’ll probably know in about a month if it made its numbers, because NFLX tends to report relatively early in earnings season.

Investors could soon get a lot more clarity regarding NFLX subscriber growth. The company has been reporting subscriber numbers and financial performance for the U.S. and globally, but has said previously that it will initiate four geographic segments with its first quarterly report of 2020.

Despite a negative news flow, shares of FB never really fell off the pace this year and are up 56% year-to-date. They continued moving up the ladder late last week. A positive research note and price target lift from Deutsche Bank last week might be clicking some new likes for the stock. 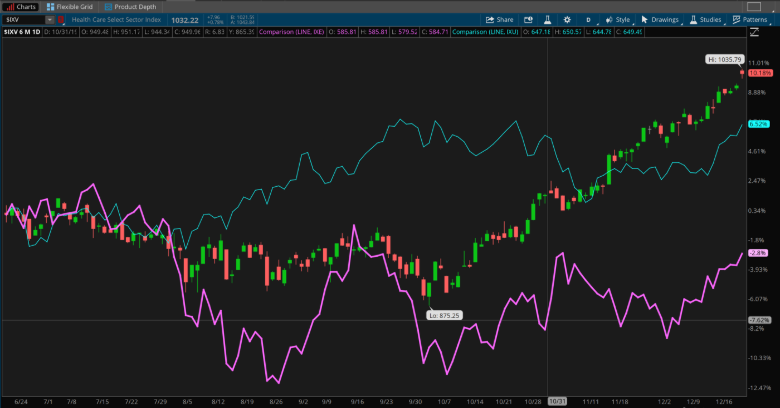 CHART OF THE DAY: A HEALTHY TREND. Several sectors ended last week on a strong note, including Health Care (IXV-candlestick), Energy (IXE-purple line), and Utilities (IXU-blue line). These are typically thought of as “defensive” sectors that investors tend to embrace when they’re cautious. This, along with strength in bonds and gold, might indicate there are still skeptics out there uncertain if the economy can charge into 2020. Data Source: S&P Dow Jones Indices.Chart source: The thinkorswim® platform from TD Ameritrade. For illustrative purposes only. Past performance does not guarantee future results.

Before We Get Too Excited: Things seem to be going pretty well on the geopolitical front as we approach the end of the year, with signs of possible resolution to long-term issues like trade and Brexit. That said, it’s also important to highlight what could potentially go wrong next year. We recently discussed this in our 2020 Market Outlook.

Consider the following possibilities a few things to potentially keep on the worry list: The economies of Europe, Japan, and China could continue to slow, putting pressure not only on the U.S. economy but on U.S. Treasury yields. That would be tough for multinational “growth stocks,” as lower yields and a strong dollar might tempt investors to focus on more “defensive,” dividend payers.

There’s also the chance that trade talk progress could get hung up as China and the U.S. sit down to talk big-picture issues, or that more sanctions on Europe and South America could slow growth. Another potential bump in the road would be seeing tensions flare with North Korea or Iran, and Brexit might get bumpy as the UK negotiates its exit strategy with the EU.

Caution: Wake Turbulence, 737 MAX: Wake turbulence is an aviation term for the disturbance in the atmosphere that forms behind an aircraft as it passes through the air. Sometimes planes encountering wake turbulence can have a bumpy ride. This could also apply to the U.S. economy and, more specifically, Boeing suppliers. The company’s troubles with the 737 MAX could potentially take a couple basis points off of 2020 gross domestic product growth, some analysts say.

It could certainly have ramifications for the S&P 500 Industrial sector, which is an under-performer so far in December. BA recently announced suspension of 737 MAX production, and several airlines now project they won’t fly the planes until April at the earliest.

Meanwhile, BA’s fuselage supplier for the plane, Spirit Aerosystems (NYSE: SPR), announced Friday morning it’s suspending its Wichita production of the 737 Max effective Jan. 1. The company’s press release didn’t say anything about jobs, but approximately 12,000 employees work at SPR’s headquarters in Kansas. It’s not too big of a leap to start wondering if BA’s struggles might eventually have an impact on job growth in 2020, because SPR is far from being BA’s only supplier. Keep your radio tuned to this frequency for further updates.

Don’t Discount Inflation: After Friday’s benign Personal Consumption Expenditures (PCE) index data showing core inflation rose just 1.6% over the last year, inflation might be far from peoples’ minds. The 1.6% figure remains below the Fed’s stated 2% goal, and the Fed made clear earlier this month it won’t be likely to consider rate hikes as long as inflation is tame.

That said, recent rallies in crude and copper prices do merit a look. For instance, another $10 a barrel rise in the price of U.S crude would take it to $70 a barrel, near the top of its range in recent years and a level that would probably mean $3 a gallon gas for much of the country. Something like that has a chance of hurting consumer confidence, and might get the inflation conversation started.

Everything runs in cycles, including inflation. It’s cyclical and you don’t know when it’s going to happen. It’s not like someone rings a bell, but you can give yourself a chance to potentially stay on top of these economic cycles by monitoring things like copper and crude prices.

Image by Felix Dilly from Pixabay