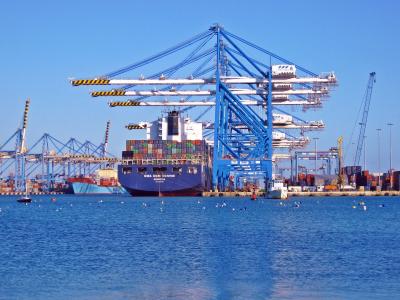 When Carl Bentzel was sworn in as commissioner of the U.S. Federal Maritime Commission on Dec. 9, his career in federal service in a sense had come full circle.

During those years on Capitol Hill, Bentzel worked for key lawmakers and their constituents on crafting pivotal maritime industry legislation, such as the 1998 Ocean Shipping Reform Act and 2002 Maritime Transportation Security Act. These legislative actions would help to shape the FMC’s regulatory authority for the next 20 years.

As part of the Senate Commerce Committee, Bentzel was responsible for ensuring that the FMC carried out its regulatory authority as Congress intended. He also handled numerous applications of nomination to FMC commissioner on behalf of the committee.

“It was my job to take care of the agency and make sure they did the right thing,” he said in a recent interview with American Shipper. “But I did not think at the time that I would become a commissioner myself.”

In fact, Bentzel left Capitol Hill in 2004 and spent the next 15 years working as a lobbyist and public policy consultant in Washington, D.C., but he continued to represent industry clients on maritime issues.

In early 2019, longtime public policy and shipping industry friends urged Bentzel to fill out the Trump administration application to be considered for nomination as a FMC commissioner. Having turned 57 years old, he rekindled his desire to return to public service.

“I think it helped that I had been a [Senate Commerce] committee staffer, having had so much experience in this area. I knew the statutes governing the FMC, since I helped write them,” Bentzel said.

Nominations often languish for months and sometimes years. However, Bentzel’s nomination moved quickly through the Senate. The Senate Commerce Committee held a confirmation hearing July 24. The committee approved Bentzel’s nomination for the full Senate’s consideration on Nov. 13, which occurred on Nov. 21. He was sworn into office about a week and a half later.

Bentzel’s placement on the commission marks the first time since May 2017 that the FMC has had a full complement of five commissioners. He joined Chairman Michael Khouri and Commissioners Rebecca Dye, Daniel Maffei and Louis Sola.

Bentzel has wasted no time diving into his role as FMC commissioner. “I’m impressed with the steps the agency has taken to be proactive in trying to address issues that adversely impact the ocean shipping industry,” he said, noting how the international container carriers have consolidated to about a dozen in recent years.

The commissioner has taken a personal interest in regional container freight issues. He recently visited the Port of Houston to review ongoing container vessel constraints within the port’s ship channel.

“After years of claiming how excited they were that the Panama Canal would be enlarged, the state passes restrictions that effectively eliminate the ability for container vessels over 1,100 feet long to transit the Houston ship channel without a waiver approved by the pilots association,” he said.

Bentzel explained that two container carriers last year planned to introduce up to 14,000-TEU ships to Houston but have since abandoned the effort due to the ship channel transit restrictions. He continues to speak with port authority, container carriers and Coast Guard officials about this hindrance at the port to commercial shipping.

“I don’t question that there could be some safety implications operating two-way transits in the narrow shipping channel, but this matter could have been managed better and appears to discriminate against container operations,” he said.

Bentzel is not only monitoring the commercial impact of the International Maritime Organization’s new low-sulfur fuel requirement, which took effect Jan. 1, on the ocean carriers and shippers but also the draymen who transport containers in and out of the nation’s marine terminals.

“It’s going to take a while to see how the supply and demand for low-sulfur fuel shapes up,” he said. “Just before we switched the trucking industry over to low-sulfur fuel in 2007, diesel fuel was about 15 cents cheaper than gasoline. Now it’s 15 cents above that. This type of fuel cost swing for a drayage carrier could be detrimental.

Bentzel said every few days he contacts the Owner-Operator Independent Drivers Association and U.S. Energy Information Administration to receive updates on diesel fuel prices. “I will continue to monitor this,” he said.

To keep up with the increasing volumes of container traffic, Bentzel believes the commission will receive increasing numbers of cooperative agreements filed by port authorities and marine terminal operators for its review.

“I really think they’re valuable, but you have to look at them closely to ensure there is no anticompetitive impacts,” he said. “In order to move forward with inland ports, distribution centers, enhanced rail services and chassis pools, you need multiple parties involved and that’s going to be necessary to build the next generation of maritime infrastructure.

“The posture of the agency is enhanced by the fact that we’ve been able to approve, or allow to come into effect, a lot of proactive agreements to address and mitigate environmental quality and congestion issues,” he added. “That wouldn’t happen under pure-competition policy and it’s probably the only way that we’re going to address the volumes of trade that we’re projecting.”

Bentzel is also interested in increasing the FMC’s role in ocean shipping safety and security matters. He is on board with Chairman Khouri’s initiative to work with the Coast Guard and Customs and Border Protection when possible to crack down on mis-declared hazardous materials cargoes, which have been speculated to be the source of several recent containership fires. “I think it makes a lot of sense. It’s a safety function and a potential terrorist threat,” Bentzel said.

In addition, he believes the FMC should monitor the developments of China’s “maritime silk road” initiative. “China offers valuable commercial carrier transport that’s cost effective, but you must wonder to what extent these maritime assets come into play for other objectives. What does that mean to non-Chinese competitors?”

On Jan. 15, Bentzel participated in his first commission meeting. His fellow commissioners publicly welcomed him on board. “It’s been really a great transition,” he said.

Bentzel then cast votes in favor of motions to implement the final rule granting new agency authority under the 2018 Frank LoBiondo Coast Guard Authorization Act and to issue a final rule that modifies hearing procedures governing the denial, revocation or suspension of ocean transportation intermediary licenses.

Image by Steve Howard from Pixabay

Fuller To Forwarders: Adapt To Amazon Or Perish

Amid Trade War Flare, Earnings Continue With Disney And Uber This...