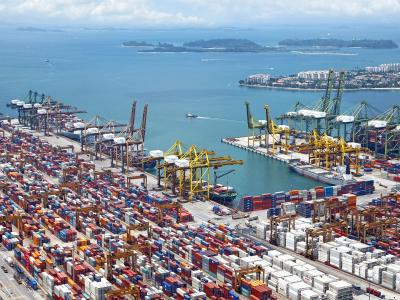 The alleged violations by the subsidiary of Eagle Bulk Shipping (NASDAQ: EGLE), occurred when its Singapore affiliate, Eagle Bulk Pte Ltd., entered a charter agreement in June 2011 to transport sea sand by bulk vessel on behalf of Myawaddy Trading Ltd. from Kawthaung, Burma, for a land reclamation project in Singapore without obtaining the required OFAC license.

Under the Burma Sanctions Regulations, Myawaddy had been placed on OFAC’s Specially Designated Nationals and Blocked Persons (SDN) List for its affiliation with Burma’s military government. U.S. persons and companies are generally prohibited from conducting business with individuals or entities on the list.

Eagle Shipping applied for the OFAC license prior to accepting the first load of sand from Myawaddy on June 28, 2011, knowing that company was on the SDN List. However, before receiving the license denial from OFAC, the company had already begun transporting sand for Myawaddy.

On May 18, 2012, the company applied for another OFAC license to transport sand for Myawaddy, which the agency subsequently denied. OFAC said the president of the company at the time received the license denial letter but “failed to forward it to others within Eagle.”

Eagle continued to transport sea sand supplied by Myawaddy from Burma to Singapore without an OFAC license.

In 2014, shortly after Eagle emerged from Chapter 11 bankruptcy, its new owners and senior management discovered the sanctions violations and disclosed them to OFAC.

OFAC could have assessed a maximum civil penalty of $9 million against Eagle for the violations. However, the agency took into account that Eagle provided a voluntary self-disclosure of the violations, cooperated with investigators, and responded in “an effective, efficient, and timely manner to OFAC’s multiple requests for information.” The settlement amount was thus mitigated to $1,125,000.

The agency said the case demonstrates “it is essential that companies engaging in international transactions consider and respond to sanctions-related warning signs, such as information that goods originated from or were supplied by a person or entity subject to U.S. economic and trade sanctions.”

“Burma has made significant strides in recent years, including choosing a civilian-led, democratically elected government,” Adam J. Szubin, then the Treasury Department’s acting undersecretary for terrorism and financial intelligence, said in a statement at the time. “Lifting economic and financial sanctions will further support trade and economic growth, and Treasury will continue to work with Burma to implement a robust anti-money laundering regime that will help to ensure the security of its financial system.”

The later lifting of the regulations, which were in effect at the time of Eagle’s violations, do not waive the $1,125,000 penalty.

Bond ETFs Are Big And Only Getting Bigger

How Much Is The Price Of An Eighth Where You Live?